Obama organizing picketers to protest against his own HHS Secretary

You know it's gonna get stranger.

President Obama is promoting public service via TV and other ads directing people to a government web site, serve.gov. We noted a few weeks ago that one way to serve your country was to attend an "Obama Loving Day Party" with donations going to local Democratic Party affiliates.

Today's public service opportunity is even more bizarre. If you search for volunteer opportunities in San Francisco on the government web site, you'll come across this one: 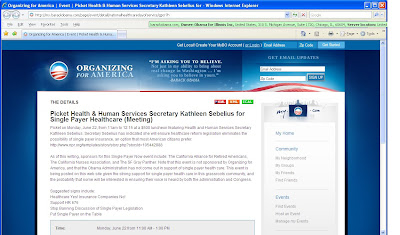 That's right, the page, hosted on barackobama.com (owned by Obama for Illinois Inc.), and paid for by Organizing for America, a project of the Democratic National Committee, is organizing picketers to protest against the President's Health and Human Services Secretary. And they make a point of the "$500 lunch," which is presumably a fundraiser for the same people who are organizing the protest.

How Orwellian. Organizing phony, pro-government "demonstrations" is a tired tactic of banana republic dictators around the world. But to have a government-sponsored and Party-sponsored "protest" against his own loyal cabinet member is really something. Perhaps the goal is to set up Sebelius' plan as the "alternative" to full-blown ObamaCare to create a false choice.

Can you imagine if George W. Bush or Dick Cheney had hijacked a government-funded public service program like this for gross self-aggrandizement and blatantly partisan political purposes?
By W.C. Varones - June 22, 2009