Yes, that's actually the title, and this is actually the illustration, for this article ($) by serious columnist Jonathan R. Laing making a serious policy prescription in a serious financial newspaper. 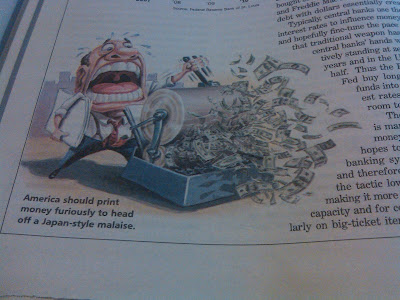 Barron's makes the common mistake that stuffing the banks with more free money will somehow cause more lending to consumers who don't want and can't handle more debt, and that this lending would be a good thing. Au contraire. More debt is the last thing we need. As I've said before, printing money to buy Treasuries will cause asset bubbles, not wage inflation, in a 10% unemployment / 20% underemployment environment. How will consumers benefit if the cost of food and gas doubles but they still have no jobs?

Laing has it partially right. Devaluation is the only way out. But we've got to get the newly printed money directly to the people of America, not circuitously through more debt from the dirty banksters.

Regardless, the prime takeaway is that QE2 is coming:

Signs of a sea change in attitudes toward quantitative easing are growing, even in unusual quarters. Last month, the European Central Bank quietly invited Vincent Reinhart, a powerful figure in the Greespan Fed as director of the Division of Monetary Affairs from 2001 to 2007, to conduct a seminar on quantitative easing for its top staffers. That was momentous, given the institution's history as a bastion of monetary conservatism and rectitude.

'cause, you know, Greenspan's easy money worked out so great for everybody!

Shall we play a game?

Wouldn't you prefer a nice game of chess?

Bubble Ben probably creamed his pants when he saw this article as he thought it gave his lunacy of infinite free money for his TBTF bankster buddies some form of credibility.

Captain Copter's cred isn't up, but Barron's cred certainly is down.

"Laing has it partially right. Devaluation is the only way out. But we've got to get the newly printed money directly to the people of America, not circuitously through more debt from the dirty banksters."

So your solution is also "print print print"? What a hypocrite.

What needs to happen now is the government to print trillions of dollars and send them in the mail to every person in America until the inflation rate hits 3%.

Spoken like a true member of the ruling class, Anonymous.

I notice that you're commenting from Washington D.C.

Congratulations on your cushy job and fat pension, you jackass, while the people who pay your salary are experiencing a depression thanks to incompetence and corruption from you leeches in Congress, Treasury, and the Fed.