I wish his boss would listen.

"The most significant threat to our national security is our debt," he told CNN Wednesday. "And the reason I say that is because the ability for our country to resource our military -- and I have a pretty good feeling and understanding about what our national security requirements are -- is going to be directly proportional -- over time, not next year or the year after, but over time -- to help our economy.

"That's why it's so important that the economy move in the right direction, because the strength and the support and the resources that our military uses are directly related to the health of our economy over time."

HT: ZeroHedge, who also reminds us that two of our three biggest creditors are evil central planning regimes whose interests directly conflict with the interests of the American people: 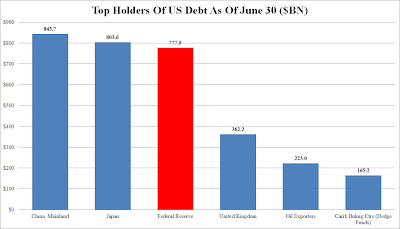 So a bad economy can also work in our favor because they won't be able to fund their fraudulent wars when the house of cards all comes down. Sacrifices need to be made to bring these madmen to their knees.

I fear another power structure will seamlessly take over where the other left off however.

DUDE! Math is not something liberals observe. Please stop using such things or else the liberal media will get angry and start crying, and maybe soil their diapers. But please don't bring true accounting and math into the argument because it is not part of the liberal agenda. Stopping climate change for the first time in billions of years is far more important!