It was another beautiful day on San Diego Bay, and the turnout for the National Doctors Tea Party was big. Best estimate would be 500-600 people. I arrived 20 minutes early, but there were already lots of people staking out prime real estate in front of the speakers' podium.

The Doctors' Tea Party was not organized by local Tea Party groups Tea Party Patriots or the Southern California Tax Revolt Coalition, but many members of these groups were happy to come support this event put on by the Association of American Physicians and Surgeons. They won't ever have to say, "First, they came for the doctors, and I did not speak out because I was not a doctor..." 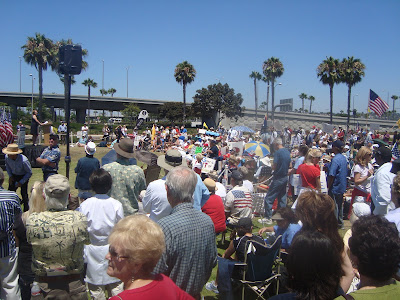 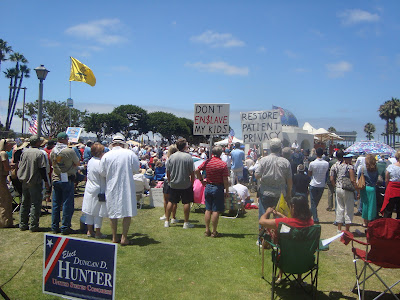 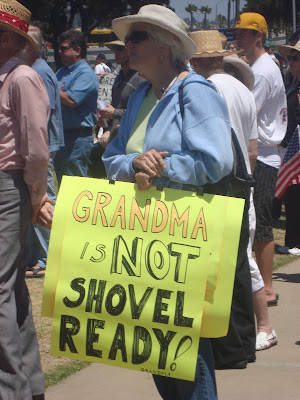 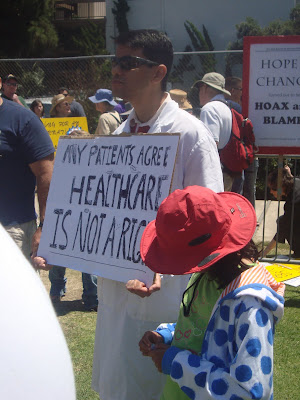 Here's the full speech by Sharron Angle, challenger for Harry Reid's Nevada Senate seat. She's not the most dynamic speaker, but she's not bad either. And she's right on all the issues. Apologies for the shaky video; close your eyes and listen. 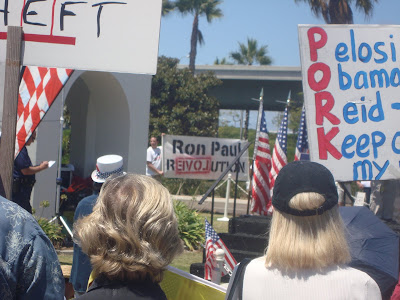 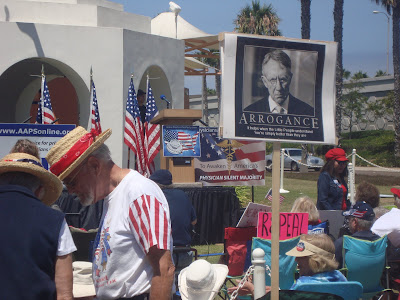 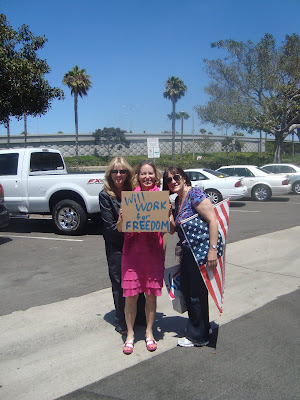 I love seeing my fellow Fedbashers at every event, regardless of the day's theme. 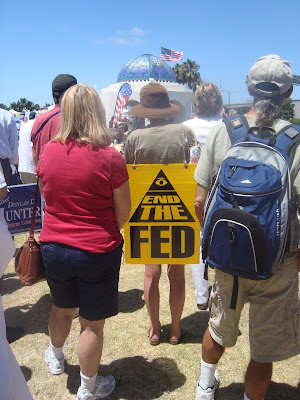 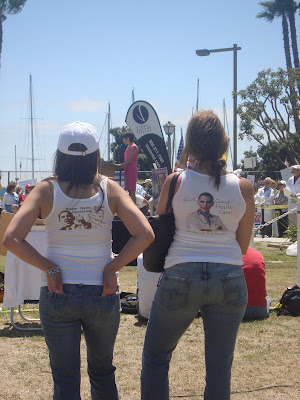 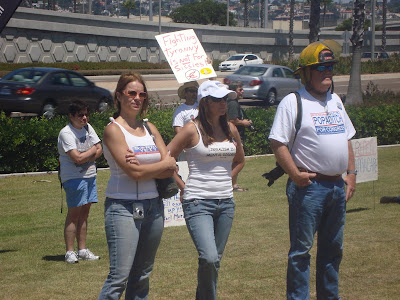 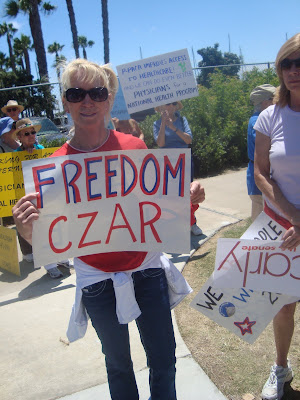 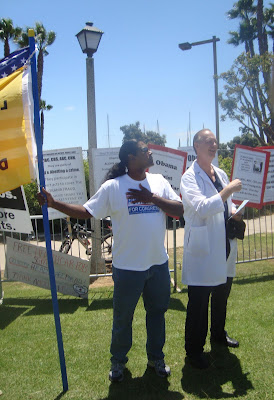 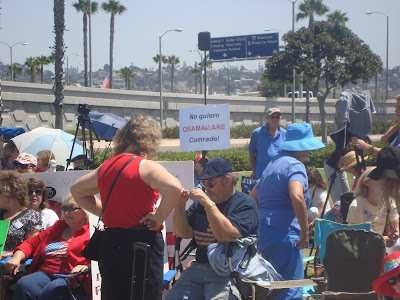 A few pro-government-health-care counter-protesters gathered under the trees at the back of the field, but didn't make much of a ruckus. 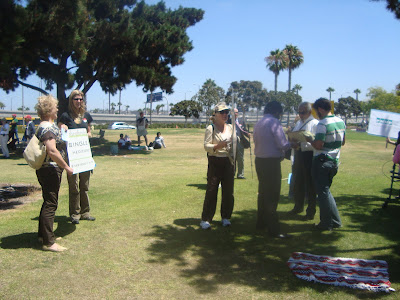 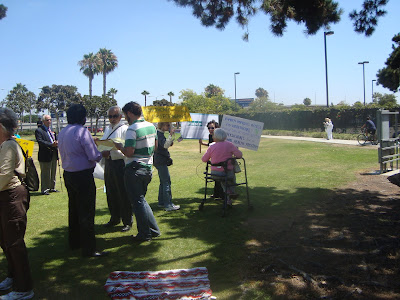 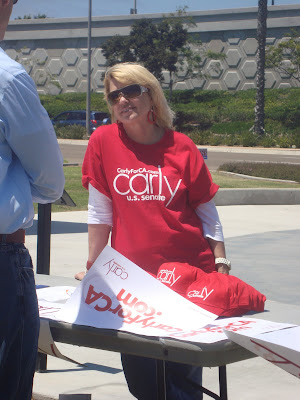 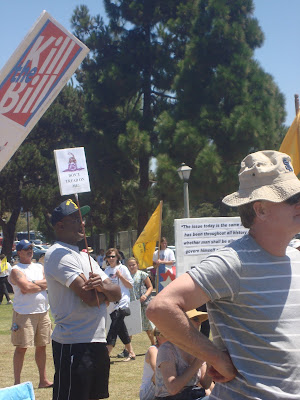 This is Dr. Donna Campbell, running for Congress in Texas. She's a good speaker and she'd make a great replacement for perma-Congressman Rep. Lloyd Doggett. 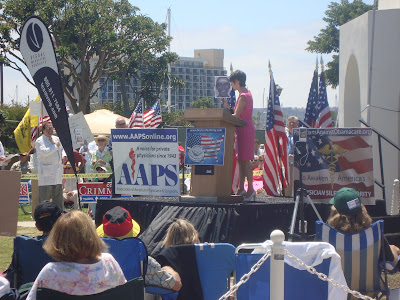 I didn't listen to all of the speakers (full lineup here), as I was walking around and talking to friends, and had to leave early.
By W.C. Varones - August 07, 2010

It was great seeing you! Thank you for covering the event so everyone can see what a great turnout it was. Sharing!

Wow looks great.
We need more hotties like the girls in the white tank tops!!

I don't see any pictures of Chuck DeVore. Have to laugh I wonder how many hats the Carly people sold. She wouldn't get a dime from me.

A great report, W.C. I am sharing this post with everyone. :)

Darn health care reform. Big insurance companies should be able to cut off coverage for sick kids any time they damn please. Profits are the most important thing. If anyone is going to pull the plug on Grandma, it should be private business. And if you lost your job and have no insurance coverage, you should just buck up and get over your disease. Do the honorable thing and walk off into the woods to die like my dog did when she got cancer. No one should tell insurance companies what to do. In fact, let's just give them all our money and not get any health care at all. Then it is a level playing field.

LOL, Anon! You hit all the high points!! Let them die with dignity - as they sail off on an ice flow.

Great post! I fully support the medical community and their battle against the ignorance of the zealots of the ruling party.

I'm not sure the Tea Party is supporting what you brilliant anons are suggesting, but it certainly isn't blatantly lying on it's own contradictory web page: HERE.

According to the White House website their won't be "rationing" but there will be rationing. Only a liberal moron can make sense out of that. Anon-es care to add some hate filled ignorance to that? Or am I just some sort of conservative Nazi who dares to use language and words? I know those are difficult for you to comprehend so I don't expect much in reply.

There are some highbrow opinions being presented here. Very nice!

I will suggest that these Anon-s might be miserable if they had to actually use their brains and think about issues, and provide salient counterpoints, as opposed to drink the party kool-aid and hate. But hating irrationally is far easier then presenting a lucid counter points.

Any doctors at this thing protesting the expansion of health care for the uninsured should be ashamed of themselves. As should all the retirees on MediCare who don't have to worry about it. The hypocrisy and lies and name-calling spewed forth on Saturday were just sad. I'm sorry my son had to hear it; he was shocked at the vitriolic attacks on the president. You folks should get a life! Seriously. Sorry to post anonymously but I know how well right-wingers respond to criticism. . .Thank God you have so little credibility left!