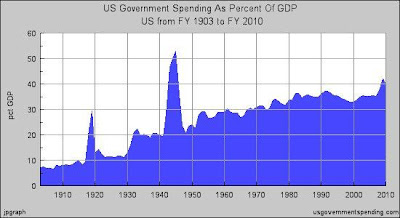 40% of our economy is the federal government. On top of state and local spending. We lost the Cold War. 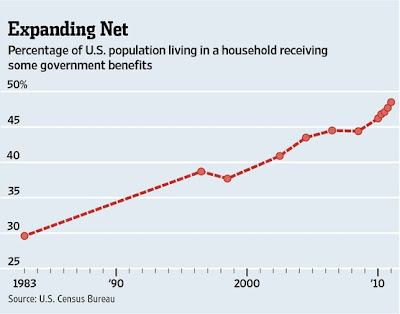 Hey isn't when we cross the 50% point we become Soviet? I may sound like I'm jesting but when more than have the population is getting benefits from less than half the population then are some animals more equal than others?

I couldn't agree more. NL is referring to the fact that we are on the verge of crossing the threshold at which more than 50% of our citizens do NOT pay ANY income tax at all. Once we cross that line, the majority will be able to always vote in politicians who promise to steal more money from those who DO pay income taxes and give it to those who don't. And once that threshold is crossed, how would we ever go back? How could a majority that pays no income tax be defeated?

Look into Cloward and Piven, and their long term strategy of swelling the welfare roles in order to bankrupt the current system so they could replace it with a socialist system. Look into how many people were given welfare right after they proposed that scheme back in the 1960s. Then look at the enormous growth in the number of people on food stamps in the last couple of years.

Crossing that line does not instantly make us "Soviet", but as I've posted on this blog before, we do have "a soviet" here in the U.S. It is the SEIU, which represents the various Government Employee Unions. Structurally speaking, the SEIU currently is operating in a role that one could say is similar to that which the various Soviets played in the years leading up to Lenin's revolution in Russia. And recently, it's been found out that, for instance, the SEIU is pushing this Occupy movement substantially. They've funded it by hiring people to protest there, by providing tents and food and publicity money, etc. Look into the SEIU's leadership. They are basically self described communists.