GAO report: the entire U.S. government is one big clusterf*&^

I think that's a technical term from Harvard's Kennedy School of Government.

The U.S. government has 15 different agencies overseeing food-safety laws, more than 20 separate programs to help the homeless and 80 programs for economic development.

These are a few of the findings in a massive study of overlapping and duplicative programs that cost taxpayers billions of dollars each year, according to the Government Accountability Office.

A report from the nonpartisan GAO, to be released Tuesday, compiles a list of redundant and potentially ineffective federal programs, and it could serve as a template for lawmakers in both parties as they move to cut federal spending and consolidate programs to reduce the deficit. Sen. Tom Coburn (R., Okla.), who pushed for the report, estimated it identifies between $100 billion and $200 billion in duplicative spending. The GAO didn't put a specific figure on the spending overlap

And the Democrats are acting like it's the end of the world to cut $60 billion off a $1.5 trillion deficit. 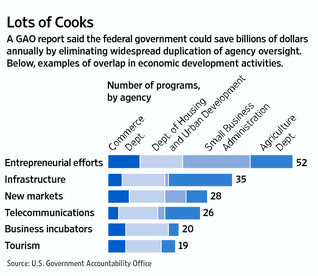 "this plate of spaghetti"

I like that. Very appropriate - crisscrossing jurisdictions, responsibilities. Very nice. I wonder if many of these bureaucratic agencies tend to have similar "Mission Statements" framed and hanging in their lobbies.