Exactly how screwed are we?

How bad is the US debt crisis? Let's head on over to usgovernmentspending.com to see: 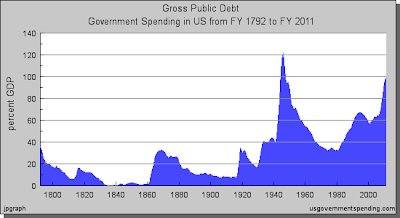 We are rapidly approaching the all-time record debt/GDP levels seen in World War II. The Greatest Generation sent millions of troops and countless tons of war machinery halfway around the world to stop the Axis' plans for world domination. We bailed out housing speculators.

But if World War II is the closest comparable debt burden, perhaps the way out of WWII debt will show us a way out of the current crisis. After all, look how nicely the debt/GDP ratio drops to reasonable levels so quickly after WWII.

Here's what Truman did: 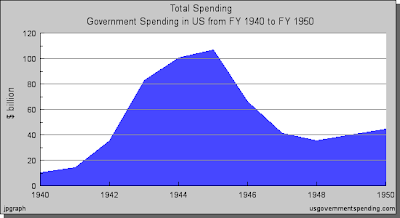 Now, I know Obama can't slash the federal government by 67% in three years, but he'll at least trim it a little, right? Didn't he just say something about fiscal responsibility and getting the deficit under control?

Nope. Obama plans to increase spending by 12% over the next five years. We're in the biggest hole in 65 years and Obama's solution is to keep digging! 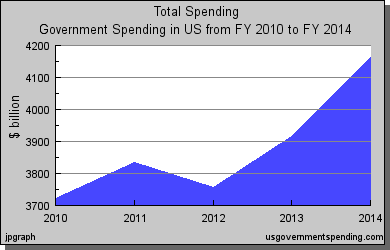 Private debt is the problem, not sovereign debt.

You're looking at the wrong chart.

WC,
I completely agree with you and not future ex pat. As you stated in the article, we are politically unwilling to reduce spending, so the public debt will mount. However, private individuals can and will adjust their lifestyles in a free society, and deal with their own debt.