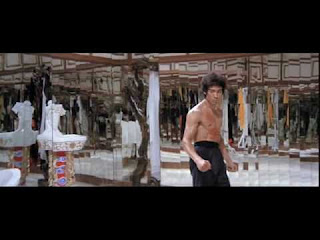 A Room Full Of Mirrors

First Jimi Hendrix sang about one. Then Bruce Lee fought Mr. Han in one. Now President Obama lives in one!

According to this transcript of a radio discussion with people who have been inside the White House recently, the entire building has been virtually turned into A Room Full of Mirrors where the President sees his own face wherever he looks. Photos of Dear Leader are everywhere. The people's house has become the people's shrine to Obama. It's suggested that they might have even removed paintings of former presidents and replaced them with photos of Obama. Even the Oval Office is plastered with images of Obama, neck-problem and all.

I think the toughest task Obama faces in his life is tearing himself away from the mirror in the morning.
By Sic Ibid - February 04, 2010