1) Both Bush and Greenspan left disasters for their successors to clean up (war, entitlements, systemic corruption, and deficits on Bush's part, and the greatest financial bubble in the history of the world on Greenspan's part).

2) Both Bush and Greenspan set horrible precedents that their successors carried to extremes (Bush with the TARP bank bailout and temporary GM bailout, and Greenspan with the "Greenspan put" that promised the Fed would always bail out the market).

3) Instead of correcting the excesses, both Obama and Bernanke responded to the crises with more (MUCH more!) of the same policies that caused the problems in the first place (Obama's monstrous deficits, endless bailouts, and government expansion, and Bernanke's infinite money-printing, zero-percent interest, and monetization of the debt). Obama is Bush on steroids, and Bernanke is Greenspan on steroids. Bush can only drool with envy at Obama's trillion-dollar deficits as far as the eye can see, and Greenspan feels like a chump when he sees how Bernanke doubled the Fed's balance sheet and printed a trillion dollars to buy assets including illegal toxic waste.

4) Bush was the worst President in recent memory. Greenspan was the worst Fed chairman in history. Both look certain to lose those titles to their successors. 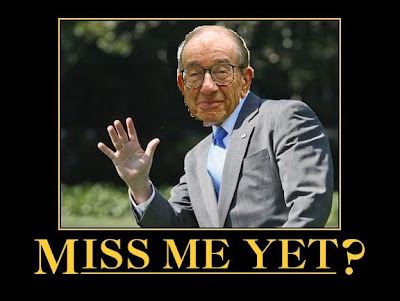 Every pundit out there is writing a book about this stuff but you summed it up perfectly in just a few paragraphs. 'Nuff said.

I think I need to start a new blog -