What is stunning isn't his statement, it is that the population isn't grabbing pitchforks and marching on 33 Liberty. People(!), your government wants the things you buy to cost more. Do you want things to cost more? 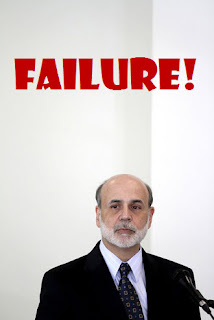 UPDATE - Denninger nails it: "In a very real sense, Bernanke is throwing Granny and Grandpa down the stairs - on purpose. He is literally threatening those at the lower end of the economic strata, along with all who are retired, with starvation and death, and in a just nation where the rule of law controlled instead of being abused by the kleptocrats he would be facing charges of Seditious Conspiracy, as his policies will inevitably lead to the destruction of our republic."

UPDATE2 - Today's quote of the day from Bo Peng: "But isn't there something wrong about the system when one person should have such a huge impact on the market? Prior examples of such overwhelming prominance include Hitler, Mao, and Greenspan."
By Negocios Loucos - October 15, 2010

Do these people know what they're doing?!