“Every single great idea that has marked the 21st century, the 20th century and the 19th century has required government vision and government incentive,” 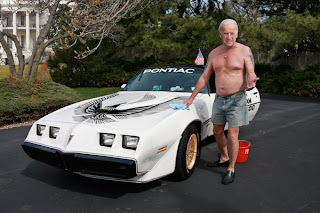 Just to be clear, he obviously doesn't include the 18th century because he is well versed in Philipp Wilhelm von Hornick's Austrian Mercantilism which was still the prevailing theory and practice; and as such Biden knows that risking comparison would prove futile at the very least and more likely invoke scholarly rebuttal. Biden is shrewd as well as being brilliant.
By Negocios Loucos - October 28, 2010

It's a little-known fact that Thomas Edison, Alexander Graham Bell, Henry Ford, and Steve Jobs were all SEIU members.

But Biden is being too modest in leaving out the 18th century. Robert Fulton invented the steamboat and Eli Whitney invented the cotton gin thanks to federal grants provided by earmarks written by a young Sen. Robert Byrd.

Great Picture! Smokey and the Biden?

The Veep is spot on.

P.S. Universal health care couldn't make it but he sends his regards.

According to other Dave & Buster's employees, Biden has not historically respected the bans that have been placed on him. After he was barred from the Tempe, AZ location in 2007, the former senator would reportedly do burnouts in the parking lot with his Trans Am while waiting to pick up a waitress employed there at the time, a woman identified only as "Candi."

I gotta have more Biden