Bloomberg: Perry’s First Debate Solidifies Frontrunner Status. It does? For fun do a word search on the page for Ron Paul. He's mentioned exactly 0 times. He was there right? I even think some thought he won. Well at least on Yahoo and MSNBC's polls he did. But BillyTG on Motley Fool comments on that:

...see how the mainstream media polls of the debate show Ron Paul winning by huge margins, but the graphical representations try to downplay the margins by which he won!

**This MSNBC poll shows Paul getting 47% of votes versus 20% for Romney. If you graphed that, Paul's bar should be nearly 2.5 times as long as Romney's right. Check out MSNBC's chart! Good thing their financial charts don't look like this!!!

**This Yahoo poll shows Ron Paul crushing his debate opponents last night, but the way they order the results makes no sense. It's not alphabetical and it's not ordered by votes. It illogically places Romney and Perry at the top and Paul down lower. But hey, I'm sure that makes sense t someone somewhere, right? 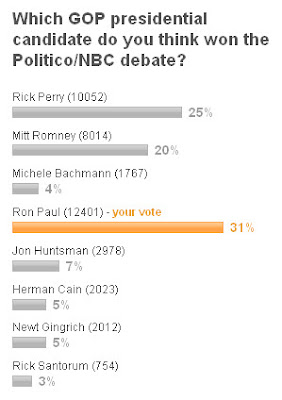 This is astonishing. Just for the sake of fairness, this is how MSExcel presents MSNBC's results: 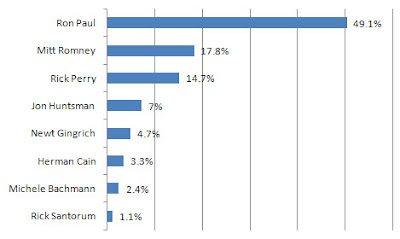 There might be 2 parties running in the next election. If Ron Paul wins the nomination then it will happen. Otherwise, as the media has already determined, you'll be voting for Corporate Liberal A or Corporate Liberal B. Both with the same beliefs, agenda and pimps. And the MSM will have won. Goooooooo FREEEEDOMMM!!!!
By Negocios Loucos - September 08, 2011

The media isn't going to give him a fair shake because they don't want him in office. Big corp runs the show and they're making money on the other candidates. No more war means GE won't prosper. Don't believe these other sellouts, they are only saying what they think will get them in office... Once they get there.. well you know the drill, dontcha? :)

It's up to the Paul supporters to get polls like this out to every news site we can. Link his ads and those of the supporting pacs as well in every post.. Donate what you can, either money, time or both. Become an army for liberty and fight this kind of tyranny.

Yes very good job. We're all watching though and if they keep this up so will most of America. Let's hope they are that stupid.

Now they are trying to sideline him even in the Internet, with there LIES.

They are after him like mad dogs because Mr. Paul stamped them in the Poll results

Its called Lying with Statistics.

Im not from USA but seeing how your media downplays the man who always speaks the truth and stands for liberty makes me sad....I hope and pray that the supporters of Dr.Ron Paul will stand up this time around and spin the table in such a way that it sets the example for all the other countries....My brothers and sisters stand beside this man, he is the only hope of USA and not just that he is the only hope for humanity....people around the globe are with you, our thoughts and prayers are always with you

I’m a Ron supporter, but listen to me clearly: he needs to go on the attack and sell HIMSELF to those who are not on his side yet. His campaign did a great job with the Reagan ad, and Perry’s response even boosted Paul. But nobody is paying attention to that – the MSM buried the Perry response almost immediately. What he needed to do was, when asked in the debate whether Perry was really conservative, he should have said: “Listen – Perry is not conservative at all – he represents the status quo, as do the other candidates on this stage. I ask you, the american people, to look into their records and see for yourself. I am the only one who was endorsed by Reagan” etc. I’m sorry to say it, but he flubbed that opportunity and got off track talking about “social misfit.” I understand that he was marginalized and didn’t get half the attention that the others did, but he could have used that opportunity in a huge way if he had attacked, point blank, the other candidates – he should have pointed to Perry’s connection to the big Pharma that was peddling the Gardasil, etc. The others would have had to defend themselves and their records, which would have led to some Paul headlines next day. He needs to get down and dirty this cycle: his record is out there, he already spent the last campaign educating the people on his message. Now it is time for him to play politician, and clearly and concisely attack the others and sell himself (he also missed the boat with Perry’s ‘gotcha’ Reagan point in the eyes of most viewers, as well as the focus of the moderators on ‘Fed Up’ which he should have immediately pointed out as a rip off of ‘End the Fed’). Honestly, I was disappointed that he didn’t use the language of Jesse Benton about Perry adopting ‘Tea Party swagger.” I pray that his campaign takes note.

By the way, I voted for Paul in every online poll I have come across, but in reality, I think the establishment won this particular debate (look at the expression of the moderator from Politico on Ron's Reagan response: same huge grin as Perry, and that moderator in particular was being Perry's cheerleader - promoting his book, posing questions to him that were chances for him to sell himself, etc.

On the Reagan response, Ron fell into their trap and gave a mediocre defense of himself (which still made him look bad), they went to commercial and then sprung the whole Reagan retrospective, with Perry the first to speak after it (subliminally undermining Paul and raising Perry). The problem here is this: the MSM establishment crowd are trying to bring out Perry's record problems (that they know he will have to face) in the most amicable environment for him, he pretends to address them, and then they go away and the average viewer thinks they have been dealt with (cf. McCain's tactic: address the attacks yourself = you look like the good guy and people forget about them).
I think Paul really missed an opportunity to go after Perry at the jugular, and now that this debate is over and those questions are behind Perry, Dr. Paul will have an uphill climb reigniting concern over Perry's past. It is so transparent to me as a Paul supporter that the political and corporate establishment have already chosen their guys, the other RP and Romney, and they are painting Perry as the conservative Tea party man so that the average voter thinks he is choosing between two options, when in reality, if you see Romney's response to the Perry Gardasil issue, they are buddies and on the same team.
However, this is not obvious to the average voter, and if our RP doesn't strike down that falsehood every chance he gets by attacking Perry, pointing out (not in a nuanced way but in a 'make no mistake' way) that the others are stealing his rhetoric and that he is the only true conservative, then he will be marginalized and the voters who want a conservative candidate will vote for Perry.
At this point in the game, I believe that for him to have a chance, Dr. Paul absolutely must play tough - he cannot afford to be nice and low key, or make subtle references to things that his followers will notice but will fly over the heads of the average voter (i.e. the way he 'puts down' and challenges his opponents).
Make no mistake: I admire Paul's kindness, but to win this election he MUST make strong statements against the other candidates, and he must rehearse some sound bites and focus on his presentation and the way he comes across.
He should have forceful convictions, not just about his ideas (which of course he does) but about HIMSELF as the holder of those ideas.
His ideas are already out there and everyone who looks can see his record - now is the time to sell himself emphatically and vigorously, and not shy away from self promotion.
One example of this: when Perry brought up his letter, he should have asked the audience to read it for themselves, stating 'when i say that the Governor is way to the left of Reagan, he responds by saying that Im more conservative?', and turned it around into an attack on Perry and an example of his unwavering principles and true conservative bona fides. His actual response, although adequate enough for those of us who are his supporters, came across to everyone else as an attempt to justify a mistake, and left him appearing weak in the context of the debate.

Please don't respond by saying that I'm criticizing Paul - I am an ardent supporter. I just think that these things should be discussed,
and anyone who is on his campaign staff should take what I am saying seriously and consider asking the good Dr. to work on a strategy of attack and follow through with what was started with the most recent campaign ad.

Last Anon - I totally agree with your analysis. I wonder if Ron Paul realizes that he's not going to overcome the establishment and is just laying groundwork for Rand to run next time around. I mean I am all for Ron Paul but he does come off a bit cooky to the average American Idol watcher. Also the MSM has succeeded in planting the seeds that he's KKK racist. I don't know where that comes from but ask the liberal zealots I am surrounded by and that's the first thing they say.

The first thing I notice is that the debates are usually on pay per view channels.Poor people have the most to benefit from Paul's message and they can't afford to pay attention.Cable is one of the first bills to go when tightening the family belt.

I'm done voting for anyone born before 1965.

All the divisiveness and partisan bickering is the latest iteration of 50-/60-something Boomers still acting like teenagers, still thinking it's 1965. Goddamn, the entire youth cohort is sick of this sh*t. The Boomers and their elders have run roughshod over this country for over FORTY YEARS already. Really, it's enough... where is the young blood?

Yeah Ron Paul is a bit kooky but many actual smart people can be this way. he's not so much a leader really, rather an oracle of these weird times we live in. let’s face it, Paul has been reading book after book for 30 years, and although he seems to be saying the oddest stuff (a dime a gallon; that’s silver folks) the secondary comment about inflation and the current system of money control was the real point (although he never seems to get to the point in these debates.)

Getting rid of minimum wage; there’s another one, but if you think about it, paying people just enough to eat and live to work the next day (slavery) is what the minimum wage is all about.

The comment about the fence; I think again, his point was lost in the details in that he seemed more worried about an ID card and keeping peoples movements under surveillance (and perhaps the next step is control.)

Ron Paul is a rambling intellectual. He’s therefore unelectable because really, how hard is it to laugh at the thoughts of a nerd basically? But when China, Russia and India create a new world de facto currency based on gold and silver… wait, I sound like Ron Paul! Crazy talk! http://online.wsj.com/article/SB123780272456212885.html