This from our Canadian stock guru pal Tim Sheithner:

What should a union do when their company’s stock is trading at $1.58? Why threaten to go on strike over unfair working conditions and poor pay of course!

The Globe and Mail:

As a strike deadline approaches, Air Canada is coming out swinging by telling flight attendants to buck up and accept the unpredictable nature of their jobs.

“This departure from the routine is what makes the role attractive, and why we receive, on average, 25 applicants for every cabin crew member we hire,” Susan Welscheid, Air Canada’s senior vice-president of customer service, said in an internal letter to flight attendants.

[...] She produced a table to show that a cabin crew member, age 55 with 30 years of service, garners $51,500 in salary, plus $27,880 in various benefits and pension contributions to boost the total annual compensation to $79,380. Air Canada flight attendants are among the highest-paid crew members in the North American airline sector, she said.

$80 grand plus free Mile High Club benefits for someone with a high school education. Not bad. But then why not ask for more when the market is telling you the company is near bankruptcy? 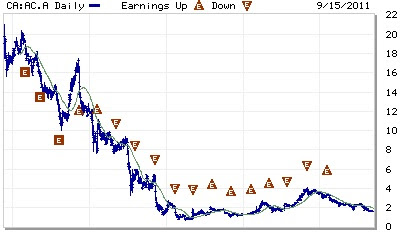 Back when he was a value investor, before he was just a crony capitalist and tax loophole exploiter, Warren Buffett said of airline stocks:

But seriously, the airline business has been extraordinary. It has eaten up capital over the past century like almost no other business because people seem to keep coming back to it and putting fresh money in.

You've got huge fixed costs, you've got strong labour unions and you've got commodity pricing. That is not a great recipe for success.

I have an 800 number now that I call if I get the urge to buy an airline stock. I call at two in the morning and I say: "My name is Warren and I'm an aeroholic." And then they talk me down.

Nothing like the highest paid in the industry complaining about low wages! I just hope I don't get stranded in Fredericton...

How about the Detroit unions ramping up for more strikes? Union build cars suck. Non-Union built cars are good, why? Because a non-union worker will lose his job if he does poorly. A union member will only be required to cut back on the Maddog 20/20 he drinks on his breaks.

The shame is that Air Canada was one of the last nice airlines. I always enjoy my flights with them because they employ nice people. Shame to see them going down the tubes as well.

How about an education in facts to all the wrongfully informed posters. Including the writer of the article. Highest paid flight attendant at AirCanada makes 47K and that takes 10yrs to achieve. a newly hired flight attendant makes 19K- that's barely a notch above poverty.This is after the fact this group has made wage concessions and not received a raise in over 10 yrs.Why doesn't someone ask what the CEO of AirCanada got for a bonus this year? That's right 2M dollars.
Now for all the typical complainers looking to destroy standards of living of middle class (which has practically been annihilated)Today's world policy << Everyone should take a wage cut most especially no-good unionized workers. Everyone. As long as I am not part of the everyone!!!!>>
BTW - before the whining begins.I don't work for the airlines. But I do read before lashing out with ignorant comments.