As Long as Your Nephew is the President, You Can Be an Illegal Immigrant and Become a Citizen 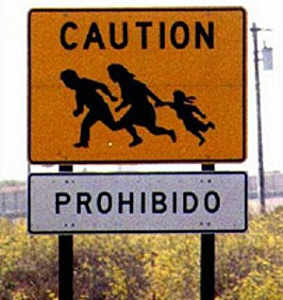 Not only can you be an illegal immigrant (after a judge tells you to GTFO), you can be granted a green card and maybe even US citizenship.

Oh crap! Are they rioting in Arizona over this yet?

A Boston immigration judge has granted asylum to President Barack Obama's aunt, Zeituni Onyango, clearing the way for her to stay in the United States and possibly to become a US citizen, her lawyers said today.

Asylum from what exactly? The crap they have to deal with back there in Not Ah-merika? Please.

I am 100% for legal immigration, my son's father is a Nicaraguan exile who faced certain death at 15 if he did not leave the country. Civil war is like that, perhaps Mr Obama can give his aunt a lesson in how that works. How bad can it be in Kenya?

Oh wait, the inhumane conditions in Kenya from which Auntie Obama sought to escape (illegally. Again, I remind you just in case) have been nurtured by debt. Really, really bad debt.

Those vultures at the IMF got to them. Bad. So I guess that's a valid reason to want to come to Amerikaans before they get to us too but don't try to pull that $hit because your nephew is the president. Where our president comes from is a sore subject here, let's not get into that.

God bless America! She'll probably do better at memorizing the Constitution than 95% of Congress. She better, the media and angry Republicans are watching.
By Jr Deputy Accountant - May 17, 2010

You forgot the best part, JDA. The White House officially says it "was not involved" in this! HA!

how about "just the tip"?