Ally Bank lies to public about being part of bankrupt GMAC

Thursday brought us the news that GMAC was asking for yet another multi-billion-dollar bailout. And, given GMAC's status as Obama's preferred slush fund to funnel tax dollars to Government Motors and the autoworker unions, it's a certainty they will get it:

The U.S. government is likely to inject $2.8 billion to $5.6 billion of capital into the Detroit company, on top of the $12.5 billion that GMAC has received since December 2008...

Given public outrage toward the bailouts and the Obama Administration, the deposit-seeking arm of GMAC rebranded itself "Ally Bank" with warm, purply, roundy, lower-case letters that are about as far from Government Motors, GMAC, and Obama Nation as you can imagine.

You can imagine the public might be reluctant to bank with Ally Bank if they knew it was really the same GMAC that is bankrupt and leeching off taxpayer dollars to support Obama's political allies (allies! get it?). 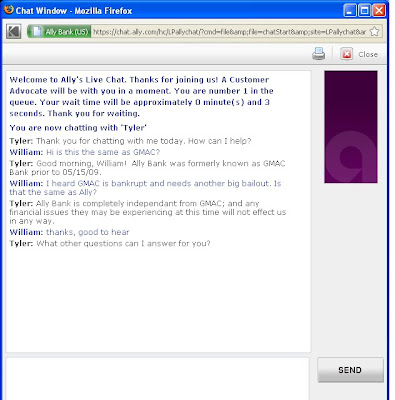 Ally Bank: leeching off taxpayers, supporting Obama's union allies, and lying about it all the way.

I'd encourage anyone who wants to have a little fun to click on over and hassle the lying dirty bastards.

UPDATE: Webuchadnezzar on the Yahoo boards reports a similar experience, but he had more patience and balls than I did:

You are now chatting with 'Heather'
Heather: Thank you for chatting with me today. How can I help?
Web: I have a question about your bank
Heather: Hello! What questions can I answer for you?
Web: So are you guys part of GMAC
Heather: I will give you a little background about our bank, Web...
Heather: We were established in 2001 and solely became an internet bank in 2006. We were formally GMAC Bank and changed our name to Ally Bank back in May of this year. We are a part of GMAC Financial Services and are privately owned and are our own separate entity...
Heather: We're one of the best capitalized banks in the country. And all Ally accounts are covered by the FDIC up to $250,000 per depositor.
Web: Privately owned or GMAC owned? Those guys are in trouble again
Web: It's in all the papers
Heather: GMAC does not own us. We are our own company and a part of GMAC Financial Services. Whatever is effecting GM at this time has absolutely no effect on us. We are our own private financial entity.
Web: I just pulled up the GMAC 10Q
Web: Wait a sec
Heather: Okay. Not a problem.
Web: It says "As a bank holding company, we and our wholly owned banking subsidiary, Ally Bank, are subject to risk-based capital and leverage guidelines by federal regulators that require that our capital-to-assets ratios meet certain minimum standards."
Web: Is that another Ally Bank then?
Heather: Ally Bank is not a bank holding company, GMAC is.
Heather: Have you viewed the GMAC Financial Services website?
Web: Not lately
Web: Wait let's get back to the question. Doesn't GMAC own you?
Heather: There is a lot of information in there. The website is www.gmacfs.com ...
Web: Wholly owned, to me, means '100%' owned
Heather: GMAC does not own us.
Web: So you are saying GMAC's 10Q is inaccurate? or have things just changed since June?
Heather: Would you like to open an account with us?
Web: I would like an answer, is what I would like
Heather: What that statement is saying is they are comparing GMAC to us in relation to them becoming a bank holding company. And the standards they will need to maintain their status as a bank holding company.
Web: But they are calling you their subsidiary.
Web: Wholly-owned
Web: that means 100% owned by GMAC
Web: It just appears as though Ally Bank is trying to deny an embarrassing connection to GMAC
Web: And it IS embarrassing
Web: Because they are leeching billions off of taxpayers
Heather: I can understand your concern, but whatever is effecting them does not effect us. Ally Bank is not owned by GMAC. Ally Bank is owned by Cerberus Capitol Management LLC.
Web: You do realize Cerberus owns 51% of GMAC
Web: That means they control GMAC
Web: And GMAC's financial statements they make to the SEC say they own you
Heather: Cerberus and GMAC are two separate companies. Cerberus does not own GMAC.
Web: It owns 51% of GMAC
Web: That is a controlling interest
Web: This is important because if you guys are denying a connection to GMAC it seems like you are being told to lie by somebody.
Heather: Although Cerberus has investments with GMAC, it does not control GMAC or any of its subsidiaries.
Web: GMAC's 10Q is a legal submission to the SEC. It's very illegal to lie on there. However, I'm just uncertain if maybe what was true as of June is no longer true now. That could be the case. In other words, I am not 100% certain you are not correct
Heather: Thank you for your opinions. Is there anything else I can assist you with today?
Web: I just wanted a truthful answer to my question -- right now, I can't say I really believe you
Heather: There is no reason for me to lie to you.
Web: Uh, yes, there is
Web: You might want my account
Web: You want my business
Web: You clearly realize that GMAC is an embarrassment to be associated with
Heather: I'm sorry you feel that way. Ally Bank will never lie to you. Our foundation is built on customer service. We are here to talk straight, do right and be obviously better for our customers.
Web: So you are denying the very fact that they state as a matter of public record
Web: I must tell you, this was interesting, to say the least
Web: The new Obamanomics
Web: In the future, I think Ally Bank should at least try to tell the truth.
Heather: I apologize you feel that way. Is there anything else I can assist you with?
Web: I don't think so, Heather.
Heather: Thank you for chatting with us. We value your feedback. Please click the “Close” button at top right to answer a few questions about your experience with us today.
Your chat session is over. Good-bye.

This is funny. Large corporations spend millions to enhance the truth. This is a good example.