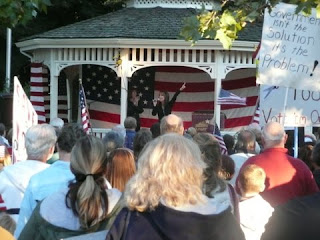 Tonight the Tea Party Express rolled into sunny Walnut Creek's Civic Park. A crowd of probably 500 teabaggers strong were in attendance. There was also an odd assortment of Obama Nation supporters probably numbering 20 or so. They actually provided the highlight of the evening, but first the main event. 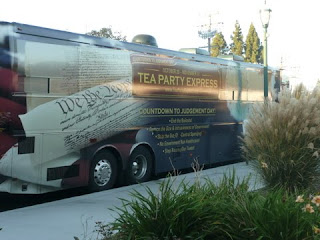 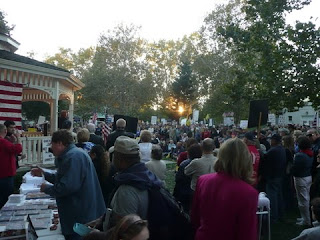 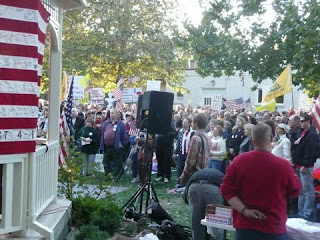 The message was consistent - bash those who don't represent the people and adhere to the Constitution. It wasn't a Republican gathering though a couple of Republican candidates were schlepping their candidacy. It was a liberty gathering. It was about the Constitution and about how our current government has broken its oath to follow it. The message was inspiring and gave this reporter hope that people do realize that our liberty is what is at stake here. 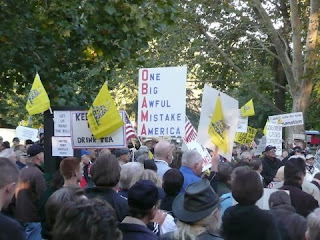 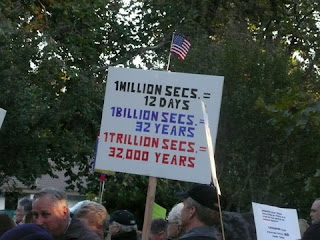 But the highlight of the evening involved a couple members of Obama Nation. Your reporter was dressed innocuously enough so as to be able to mingle among both sides of the intelligence aisle. Actually I was wearing a California sweatshirt which unintentionally is offensive to central government socialists, but I doubt they realized it.

The Obama protesters had that liberal smirk, you know the one that says their beliefs are stronger than math as in "you can't spend more than you make forever" is a debatable thesis. One of them was chanting something about GW that I couldn't entirely make out, AS IF this crowd was somehow Republican. But that's all that matters to these folks. It's their team and the other team. Facts, discourse and documented political beliefs (à la self proclaimed Maoists on Obama's Staff) are not important. All they ignorantly thought was this was a Republican gathering; had they listened at all, they would have realized this was definitely not the case.

But really the moment that truly exemplified Obama Nation came when this reporter was taking pictures of the Obama supporters. Apparently that's not appropriate to them. I didn't say a word, seriously not one word to anyone until one of Obama Nation's female, probably 65-year-old members, seen here in full attack mode, came at me and pushed me for taking a picture of her and the other supporters... carrying big Obama signs... standing on the sidewalk at the corner of Civic and Broadway... at a RALLY. Not sure what the complaint could have been. Again I didn't say a word to anyone. 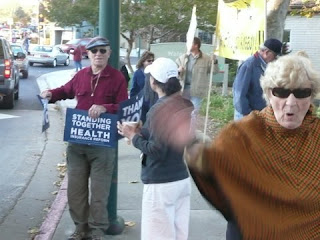 In response to her un-Constitutional act of that right hand finding my right ribs, I exercised my Constitutional right of Freedom of Speech. She ended up leaving almost in tears as I unloaded a profane, Southie-esque diatribe, that would have made Mark Walberg blush, on the topic of why she has no right to touch me. 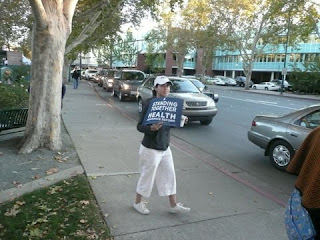 The co-Obama supporter above (yes she's cute but obviously there's not too much between the ears) started yelling at me, which is her Constitutional right, that I had no right to be disrespectful to the woman who came at me and pushed me for taking her picture. She also heard an earful from me and that's when I realized that man, living in Boston teaches you how to insult at a level that terrifies Californians. It's a powerful, legal weapon when confronted.

Now obviously I didn't feel that I was in any danger, but it perfectly exemplifies the mindset of Obama Nation. They feel free, in themselves and through their leaders, to ignore the Constitution. And when they do they expect respect in return. Doesn't that seem more like a mafia than a democracy?
By Negocios Loucos - October 28, 2009