A half hour before the 11AM start of the Sacramento 9/12 Tea Party, hundreds of people were already gathering. Speakers for the four-hour-long event include Tammy Bruce, Rep. Tom McClintock, and our So Cal Tax Revolt Coalition friend Leslie Eastman. 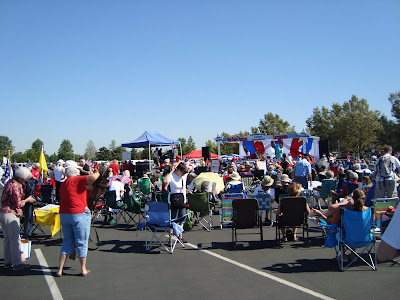 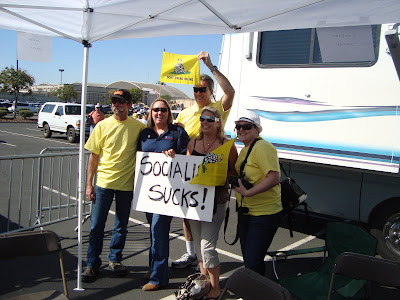 A big tent with lots of donated goodies in a silent auction fundraiser: 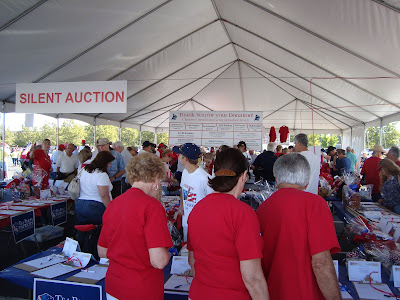 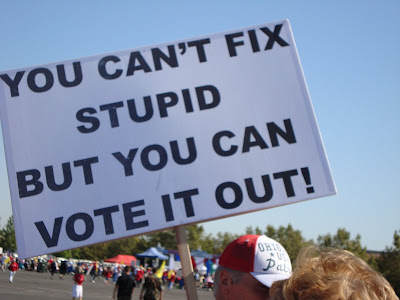 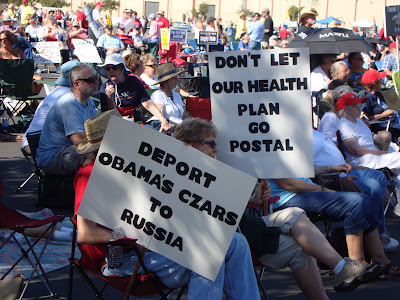 I happened to be on the same flight up from San Diego as Leslie, and her Tea Party lapel button earned a "You're with the Tea Party? You can sit by me any time!" from the fellow in the aisle seat. Also aboard were two Carly girls decked out in the Carly red T-shirts and hats.

I'll be updating when possible throughout the day.

Here's a video of the national anthem, a parachutist flying in with the American flag, and a big crowd shot at the end.

Judge Roy Moore and radio hosts Armstrong and Getty have just spoken. Crowd in the thousands.

Statuesque Lisa Fritsch of Project 21: "Wake up and smell the tea because government will not be our God!"

Tammy Bruce speaking on being a reformed leftist and how the left wants individualists to be "disappeared.". Also slamming RINOs. "Let them continue lying to themselves because they are done lying to us!". "... A quiet revolution that the left may not understand, but we will save their lives and their future whether they like it or not."

Sam Paredes of Gun Owners of California: honor the founders by restoring liberty and taking back the Constituion. 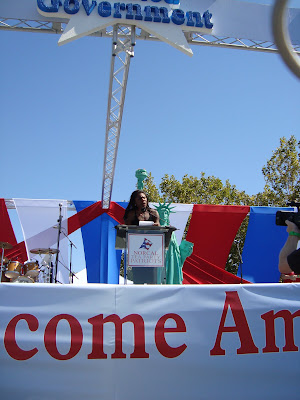 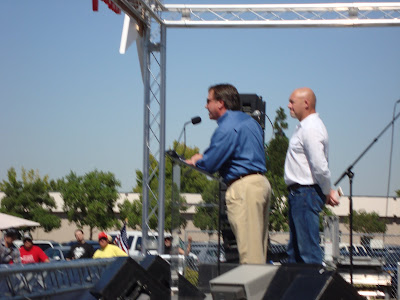 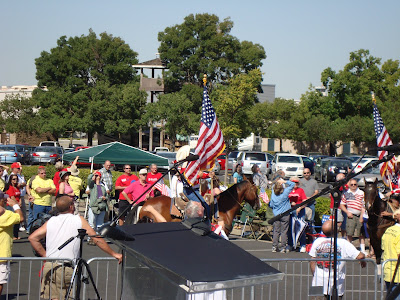 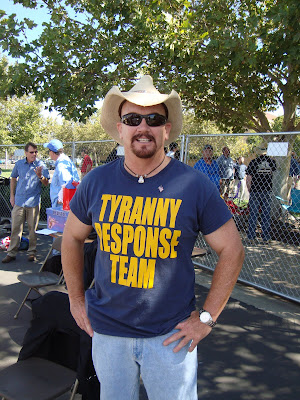 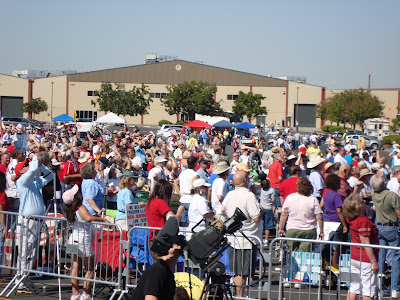 Crowd looking up at parachutist. 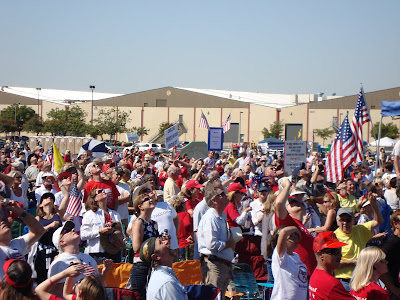 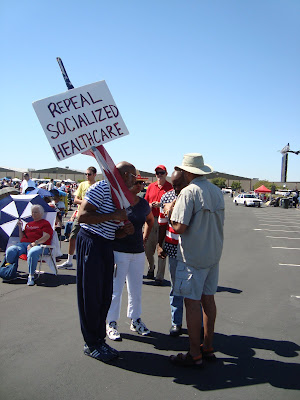 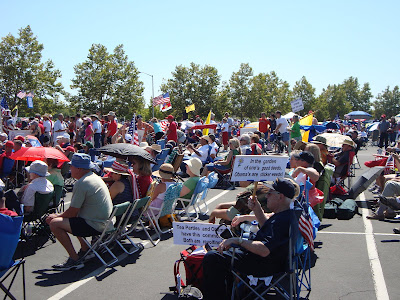 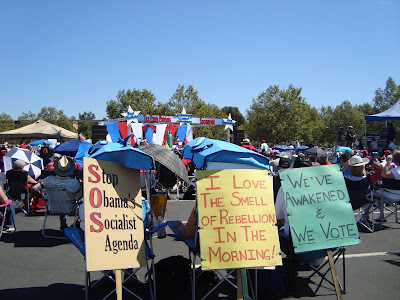 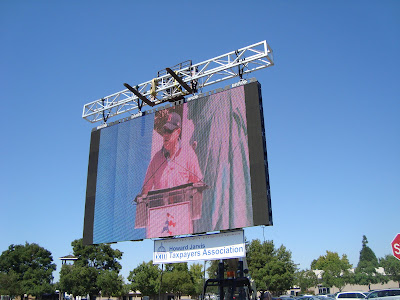 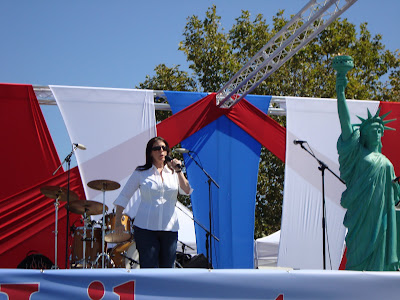 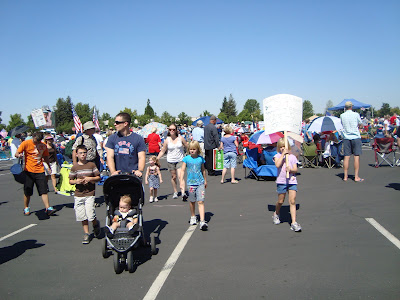 Fun for the whole family... 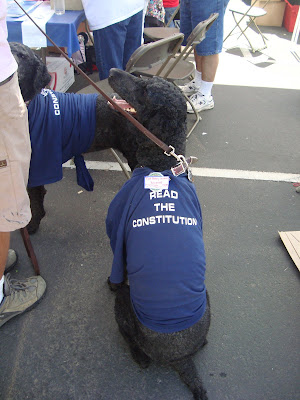 ... including the family dog.

Steve Brandau of the Central Valley Tea Party speaking now (the guy in the Tyranny Response Team shirt). He is fired up and a great speaker!

Leslie gave the penultimate speech and did a great job talking about her experience meeting with young European future leaders, and getting the opportunity to speak at Tea Party Italia. We're going global, baby! I'd put the video of her speech up here, but I'd rather you come see her live at the 10/10/10 Tea Party in Oceanside. Leslie has her post up on the Sacramento event at Temple of Mut.

Awesome! Sharing as you update...

I grew up in Sacramento so I'm curious where in town this rally took place.

Okay, so those are hangars in the background of some of those shots. McClellan's the one I never got to see the inside of very much.

The thing that impressed me the most, as I was standing in line for a "Yes on 23" yard sign?

There was a line. I had to wait a long time.

Wow. I haven't seen that many old people in a parking lot since the last time I was at walmart. Nice to see all you people are against Socialism. I wonder if you'd be happy to give away your Medicare and Social Security, hmm?

That was Rex Reed as General Fremont.

thanks for the update!

thank you. was he reinacting a speech sent to freemont from lincoln. it was a very good
thanks

Anonymous said...
Wow. I haven't seen that many old people in a parking lot since the last time I was at walmart. Nice to see all you people are against Socialism. I wonder if you'd be happy to give away your Medicare and Social Security, hmm?

I've never seen very many old people in the parking lot at Walmart.
Young people, a lot of them with out jobs, middle aged people standing on the corner holding "will work for food" signs, scrawled on a bit of cardboard, those I've seen a bunch of outside the Walmart.

The place to see old people in Sacramento is at the Good Will store. I can only interpret that as yes indeed, many must be living on social security.

So everyone got together to complain about how big government has gotten and how your voices are being ignored. I'm wondering why there were none of these rallies when George W. Bush was doubling the national debt. I'm wondering if you realize that the deficit has decreased 8 percent in the first full fiscal year of the Obama administration. I'm wondering if all of you who are getting Social Security and Medicare, or are close to it, are ready to give it up since it's a big government program.

I love these bogus strawman arguments. I don't recall hearing anyone saying to do away with Medicare or Social Security.

What I do hear and what we do need is for significant reform for these entitlement programs that are cleary unsustainable.

Quit advancing bogus strawmen, Anon, and engage in the issues at heand.