Say it ain't so, Economist

Several years ago I wrote a piece on LongOrShort about the declining standards at the Wall Street Journal. I've since fled to safer ground, and still hold the Economist in high regard; thus it is with consternation that I've been seeing things like this lately: 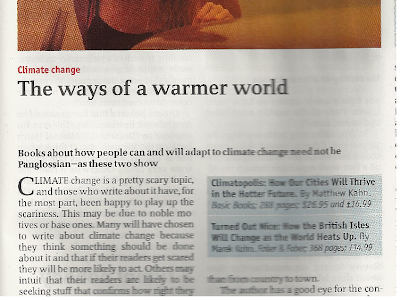 If it's not immediately clear, the headline writer uses "Panglossian" to say the opposite of what it means. Pangloss is the wildly optimistic character in Voltaire's Candide--"Panglossian" is to say overly cheery.

All the more embarrassing that this review dismisses one author as "pedestrian"...I'll bet that author doesn't regularly toss out literary references he doesn't understand.

I, for one, think the death of print media isn't such a bad thing. The best writing and analysis is not from writers per se; it is from people smart enough to do something else (professors, traders, engineers, etc.) and keep a blog on the side.

Or maybe he meant exactly what he said and you misunderstood it.

WCV, you cannot be more off-base. The point of the review is that these two books provide a different take from the usual scare-mongering about global warming.