Help! I'm In Love With Someone Who Doesn't Share My Political Views 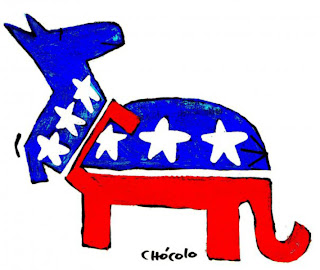 pic credit: Chocolo
Fate being what it is, we don't always have a choice when it comes to who the Universe decides to match us up with. In my case, I've been in the strange position of being hopelessly in love with someone who does not necessarily share my political views for over two years now. We don't talk about politics very often but I'm pretty sure by the way he behaves and due to his strange fixation with bashing Sarah Palin that my significant other is totally of a different political sway than I am. At first, this made me really uncomfortable, especially when introducing him to my conservative and libertarian friends. Shit, was he going to embarrass me by inadvertently parroting Si Se Puede Obama comments in private Facebook conversations? The shame!

This person also happens to work for a company whose views I don't necessarily agree with, further complicating the situation. The following tips from Broke-Ass Stuart can help if you find yourself in love with a member of the opposite political group or affiliation. It's a sticky situation to say the least.

If you’re anything like no one, your world has been rocked by the breakup of Maria Shriver and Arnold Sch-whatever. If a groping son of a Nazi Republican and a Kennedy Democrat can’t work it out, what hope is there for the rest of us!?! Well, thank god those two freaks of nature are completely un-relatable. However, it does happen sometimes that you may fall for someone with different political beliefs than you.

2) You may disagree, but does it affect your relationship?
Unless the social or global issue in question directly affects your relationship– though yes, the personal is political, etc– it’s probably OK to agree to disagree. Unless your significant other is a criminal, slave owner, racist, sexist, murderer and/or warlord, it’s probably safe to say that agreeing to disagree isn’t going to make you a “sellout”, enabler, or an “accomplice to murder”, etc.

OK, I'm not going so far as to say $4/a gallon or $12 6-packs of bad beer are actually killing anyone but it's a feeling probably not that much unlike actually dying, I know my knuckles atrophy when I have to pull out my debit card at the gas station.

In the case of the "groping son of a Nazi Republican and a Kennedy Democrat," the "experts" are calling it a personal 9/11:

"This event is like a personal 9/11," said Dr. Alan E. Kazdin, director of Yale University's Parenting Center and Child Conduct Clinic. "What happens after that can really contribute to the how their emotional and behavioral adjustment turns out."

In some cases, I guess you just can't make it work. I wouldn't go so far as to compare it to 3,000 lost lives and a terrorist "panic" that has terrorized all of us ever since but that's just me.

But look at how well Mary Matalin and James Carville have done! It can totally be done, you just have to avoid talking about politics (and, in my particular case, bank examiners) as often as possible. You can talk about them, just don't suggest to cuddle up to a little Rachel Maddow on a warm spring evening.

So far no one has disowned me for associating with an obvious non-libertarian with questionable gainful employment and neither of us like The Ed Show so I think we're doing alright. As for Shriver and Schwarzenegger, something tells me their public break-up has very little to do with politics and everything to do with the Taxinator's inability to keep it in his pants.
By Jr Deputy Accountant - May 19, 2011

And we sometimes thing it's tough enough in our household -- a Franco-Italian Chicago catholic via Notre-Dame/Saint Mary's and an East Coast, Ivy League presbyterian Swede.

And who would have it any other way?

Love is a beautiful thing, ain't it?

While, yes, there are some couples who can make this disparity work. Humor helps. But as someone who organizes tea parties, I see a woefully high number of single conservative guys compared to single conservative women. It's sort of like shooting fish in a barrel at one of these things if you're on a man-hunt. So if you ever decide politics is a deal breaker, the world is your oyster, sister (not trying to talk you out of your love, just giving you perspective if it doesn't work out)

JDA and TLP are good on oysters, as well as beer-battered coconut shrimp, double-thick bacon, overpriced beer and "tea" parties, if you get me.

But that's just my perspective.

Shut it, TLP! You'll speak when you're spoken to, my little liberal lovemuffin.

Sarah, I get what you're saying but trust me, I didn't end up with the guy out of desperation (it was actually by accident, you'll have to buy my book to hear the story haha) although I have to admit I'd given up on finding someone to date in San Francisco who didn't advocate social programs that would make even FDR cringe by the time I met him. I think the key to success in a relationship like this is mutual respect above all else.

Besides, when you get down to it, we're not all that different. I see a lot of overlap between my views and those of polar opposites of me on the political spectrum when we can put aside the name-calling long enough to have an adult conversation about things. Then again, I am a free spirited libertarian with Republican tendencies, not a closeted religious nut right-winger with a cache of guns and Glenn Beck blasting on the radio. It's a lot easier to agree with people when you are not hanging out on the very fringes of any extreme.

Anonymous (but you know who) said...

"not a closeted religious nut right-winger with a cache of guns" - don't knock it till you've tried it... the Glenn Beck I can do without... fucker cries when you say "Boo" to him.

JDA, I in no way meant to imply that your bi-political romance was conceived in desparation...liberal guys can be quite hot (as long as I don't have to see then driving a Smart Car or some other emasculating mode of transportation). Just offering up a back-up plan. And the truth is, I need to lure more single girls to tea parties...a little single-mingle never hurts attendance ;)

Gotta defend my motorhead, car crazy, engineer pal Karl here on that one:

Karl is a man who dreams up, engineers and then MAKES shit we all use and one of his rides is a Smart Car - he's partial to diesels but Smart hasn't unveiled the diesel version in the US yet.

I've never heard his old lady of the past 25 years (who is a lovely & funny old broad partial to hats) complain about Karl or what he's provided her --- perhaps he's engineered and manufactured a few toys for her too!!!

Plus he shoots guns. Yessss

Not a granola AND he shoots? Hell, then he's just a mortgage away from becoming a Libertarian.