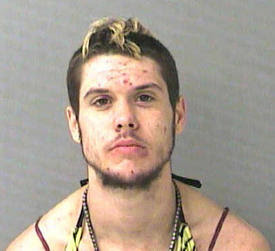 "He told them, 'Don't come in, I'm naked,'" Powers said. "But they opened the door and he was standing there with his pants down. He had on women's clothing and the goat was dead and there was blood everywhere. It was just a scene."

Inside the bedroom police found the small gray and white goat wearing a pink collar lying dead on the floor, blood coming from its neck, according to the complaint. There was a pornographic magazine photo laying a few feet from the goat, the complaint states.

Oh, cripes. One of Craig's peeps.