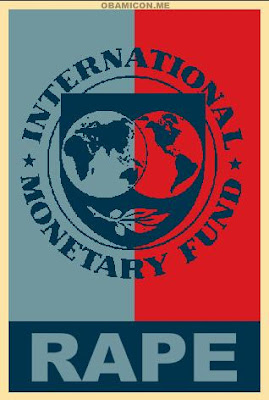 JDA has the breaking news:

The leader of the International Monetary Fund, Dominique Strauss-Kahn, was arrested on Saturday, minutes before he was to fly to Paris from John F. Kennedy International Airport, the authorities said.

Mr. Strauss-Kahn, a candidate for president of France, was taken off an Air France flight by officers from the Port Authority of New York and New Jersey and turned over to Manhattan detectives, according to a Port Authority spokesman.

He was accused of a sex attack on a maid at a Times Square hotel earlier in the day, the authorities said.

Come on, this is the Ruling Class. Aren't they entitled to a little piece of ass from the proles now and then? And he's from France, a country that thinks it's OK for the rich and famous to drug and anally rape 13-year-olds! When he beats the charges, they'll throw a parade for him on the Champs Elysee!

UPDATE: Yep, I was right. Our international bankster overlords have a get-out-of-jail-free card for maid rape.
By W.C. Varones - May 14, 2011

WCV:
What is the maid's name? Crystal Gale Magnum? Who put her up to this stunt?

Junior had the same thought.

I'm going with Occam's razor. French guys are pigs, and the IMF is above the law. DSK rammed it down her throat just like he rams onerous conditions down the throats of indebted countries.

You don't try to do something like this without having gotten away with it a whole lot before. He knew he had cover, whoever was letting him get away with this kind of shit.

I'm telling you, he pissed off the wrong people and deviated from the script. They took him out, publicly, and probably sent the tail bait up there to his room personally to get him.

I know he didn't think "diplomatic immunity" would do it.