We've had this Boycott Government Motors logo on the blog for months now, and America is responding! 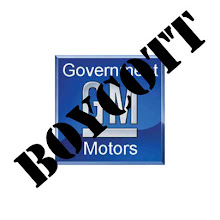 GM's sales are down 45% from last September (when sales were already bad enough to drive the company into bankruptcy). Chrysler is down 42%. Ford is only down 5%. Car buyers are clearly punishing the two bailout recipients brutally. Robert Farago of Truth About Cars--who has been right before--predicts that GM and Chrysler will both "go down by the end of next year" without a second, new federal bailout. The only question, he says, is whether the two manufacturers will need the cash before the 2010 midterm elections.