Gold hits yet another new high. 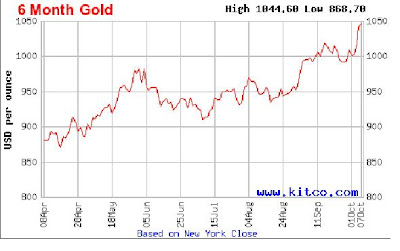 In related news, the U.S. Mint suspends production of proof and uncirculated gold and silver coins. They claim that they can't get the blanks fast enough to mint enough coins, which is complete bullscheisse. You may recall last year's shortage of physical gold. That would obviously have been a sign that the Mint needed to ramp up production. But no, a year later, they still can't meet demand, claiming that they can't get enough "blanks," the coin-shaped pieces of gold on which the Mint impresses the images and writing.

Let me let you in on a little secret. If the government wanted you to have gold, it would not be a problem to find a company that was able to form gold into little blank coin-shaped pieces. A hobbyist machinist could set up a pretty good operation in his garage to do this.

As the Mint's claim that nobody can produce blanks is laughable, I see only two possible truths:

1) There is a shortage of physical gold. There is so much contract gold being traded in futures and ETFs that the physical supply just can't keep up. The reason the government can't get blanks is not that there are no blank-makers, but that the blank-makers can't get any gold.

2) The government does not want you to have gold. They plan to destroy the dollar and they do not want people to have an alternative store of value in which to hide.

Personally, I believe both are true, at least to some degree. I've been touting gold here for years, but already I'm regretting not having acquired more. If you're fortunate enough to have acquired physical gold before it disappeared, don't sell it unless you're going to sell it to me.

Maybe I'm wrong, but if we get even a 10% price correction in gold and if physical gold becomes available at a modest premium, I'm backing up the Tonka truck.
By W.C. Varones - October 07, 2009