The depths of Obama's budgetary depravity

When you reach a certain number of zeros, the ability of the public to understand trillions or even billions approaches zero.

So when Obama asked for a pork package in the $700 billion - $800 billion range to "stimulate the economy," Congress and most CNN viewers said, "Sure! Why not! I don't know $700 billion from $700 million. What's a few zeros in a serious recession?"

So what does the $787 billion price tag for Obama's porkulus compare to? How about it's bigger than the entire U.S. defense budget, including two full-scale wars. That's right. Every time you see a gargantuan aircraft carrier, every time you think of the vast expenses of supporting two full-scale wars at once, every time you think of the hundreds of thousands of military families whose livelihoods and health care are provided for by the defense budget, yes, well, Obama's first stimulus package alone was a lot bigger than all of that put together. And since that first package, he's kept piling on the pork, including the latest twenty-something billion for yet another round of Realtor bailouts.

So in the blink of an eye, your children have been sold into an unimaginable amount of debt. But at least we kept unemployment under 8%, huh? 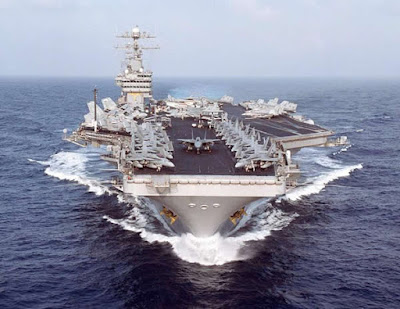 The largest military budget in the world, almost equal to the military budgets of all other countries combined, is still not as much as Obama's first pork bill.
By W.C. Varones - November 08, 2009