I was on the 45 from Union Street to the gold show at the Jukebox Marriott. It was about 10:35 am on Saturday 11/21, and we were stopped in Chinatown on Stockton Street. The doors were closing after people got off the bus, when this guy behind me jumped up and sprinted for the door. It was so unusual and obviously premeditated that he hadn't gotten up earlier that my first thought was that he was a purse-snatcher running off with someone's bag.

His true purpose became obvious when he pretended to get caught in the door, then started screaming and making a scene. I guess he was hoping the bus would pull away so he could pretend to be injured by being dragged, but since the bus wasn't moving, he had to settle for pretending to be injured by getting his jacket stuck in the door.

If that incompetent hack of a District Attorney Kamala Harris gave a shit about the city, she'd start prosecuting frauds like this before they catch on even further. I'd offer to testify, but she won't even prosecute hit & runs with injuries, so she certainly won't prosecute Muni fraud.

So the best I can do is make this guy famous, and maybe this will help Muni deny his claim. 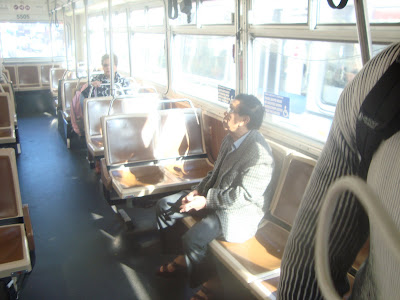 That's him sitting there, patiently waiting for the Muni accident investigator to come give him his lottery payday.

If you know anyone in the Muni accident investigation group, please forward this post.
By W.C. Varones - November 23, 2009