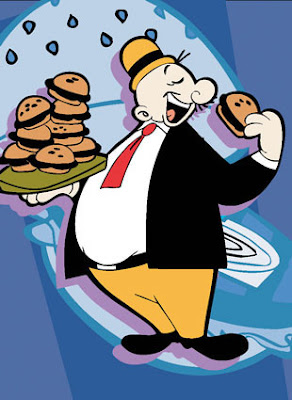 "I will gladly pay you Tuesday for a fiscal stimulus today."

“In the longer term, I think we need to be taking steps to reassure the American people and the markets that our fiscal situation is going to be well controlled,” Bernanke said [...]

Why is it always "in the longer term"? Have you ever heard Zimbabwe Ben say, "in the shorter term, it's time to quit screwing around"?

Not that this view is specific to Bernanke. All latter-day Keynesians are Wimpy Keynesians. They always want to run deficits in the bad times, but then they never recognize the part of the cycle where they should run surpluses.

If Keynes comes back as Marsellus Wallace, he's gonna get medieval on modern Keynesians' asses.
By W.C. Varones - July 24, 2010

WCV:
That's been my point for decades: Keynesianism does not exist! It is only an excuse for a country to run budget deficits. The last "surplus" the US had I believe was in 1969 and even that was the result of questionable accounting.