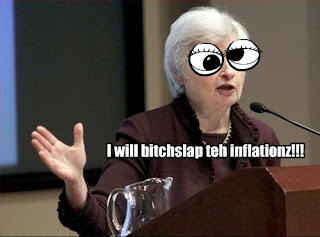 San Francisco Fed is looking for a new easy money whore replacement for the esteemed Janet Yellen, who will likely leave to take Don Kohn's place at the Board of Governors. That's if the Senate can figure out whatever else it's been doing lately that's made cramming the Fed full of easy money whores brilliant economists such a low priority.

The good news is that Janet doesn't really matter in the big scheme of things, only Zimbabwe Ben matters. A former Dirty Fed operative said so here.

Disclaimer: I'm currently improving my cash position in order to dump as much of it as I can ahead of financial doomsday. I like to call this strategy "shorting Janet Yellen's trigger finger" as I'm betting mine is quicker than hers.
By Jr Deputy Accountant - July 13, 2010

"I'm currently improving my cash position in order to dump as much of it as I can ahead of financial doomsday."