I'll be Breeding My Hamster Ahead of This... 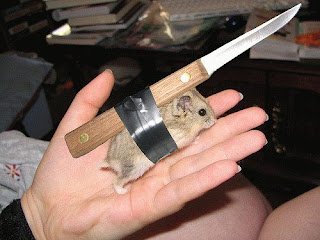 ...A) because I'm a wasteful asshole who doesn't recycle and B) when San Francisco makes pets illegal, the pet black market will thrive and I want a piece.

"People buy small animals all the time as an impulse buy, don't know what they're getting into, and the animals end up at the shelter and often are euthanized," said commission Chairwoman Sally Stephens. "That's what we'd like to stop."

San Francisco residents who want a pet would have to go to another city, adopt one from a shelter or rescue group, or find one through the classifieds.

The Board of Supervisors would have final say on the matter. But not before pet store owners unleash a cacophony of howling, squeaking and squawking.

"It's terrible. A pet store that can't sell pets? It's ridiculous," said John Chan, manager of Pet Central on Broadway, which has been in business 30 years. "We'd have to close."

So you can smoke all the weed you want but God forbid you be an adult and think out a decision like buying a small pet without the interference of the Board of Supervisors. Please. Next they will confiscate my car, force me to spay my hamster and ban the use of toilet paper made from real paper because it hurts the environment. Meanwhile Golden Gate Park is still overrun with homeless and I don't see it getting any cheaper to live here.

When I went to get my hamster, the guy at the local pet shop actually talked me out of the first one I wanted and convinced me to go with an older, already tame hamster instead. I've had a handful of them in my lifetime and he wanted this particular hamster to go to someone who knew what they were doing. She was more expensive but ended up being an excellent fit and went to a good home with someone who knew how to take care of her. That's how that transaction worked in San Francisco, entirely without the interference of the city's useless Board. I even rode the train back to my house with her since I was still riding Muni at that point - the quintessential San Francisco experience that the Supervisors would love to take away, a San Franciscan on the Metro with a hamster in a cardboard box. Oh sorry, everyone owns dogs here. Whatever. The hamster is addicted to cigarettes and gets stared at by my cat all day but is happy, fat and eats better than I do, I'd say everything worked out well.

Obviously I'm against this stupid ass idea. But it makes sense as San Francisco is so hopelessly isolated from economic reality that it might think this is genius. Or maybe it is simply a money thing and San Francisco's far leftist heart isn't as bleeding as previously suspected:

Most Bay Area animal shelters do not kill strays unless they have serious health or behavioral problems - for instance, viciousness - that would make them unsafe to adopt.

Yet many smaller, rural shelters in the Central Valley and in the northern part of the state do not have the space to keep animals longer than required by state law. These shelters are, in many cases, full of pets given up by people who have lost their jobs, seen their homes foreclosed upon, or been forced to move in search of work.

"The places that are overrun with animals don't have many resources, and now the law will essentially allow them to euthanize animals more quickly," said Scott Delucchi, vice president of the Peninsula Humane Society. "Probably those shelters were euthanizing animals anyway. It will just be earlier."

I'm waiting for the San Francisco Pet Food Registry where I have to get fingerprinted and cheek swabbed then wait 5 days to purchase canned cat food. For my grandmother, who is still getting 1% on her CDs.

Meanwhile the illegal San Francisco gerbil trade will also be huge, should anyone want in early.
By Jr Deputy Accountant - July 11, 2010

So many of our favorite topics -- nanny state, police state, GD II, and Zimbabwe Ben hating on Grannie -- all woven into a rich tapestry.

I am forwarding this to the humane enforcement/HSUS. Ass wipe

You have been reported to the Humane Society of the United States. Your blog link was attached.

LOL the "Humane Society" kills hundreds of thousands of animals a year, meanwhile I take excellent care of my two girls, what exactly are you reporting me for?

Get a life, asshat.

Michael Vick's vicious dogs were mostly retrained to be useful dogs, I must have read that on the innertubes.

Not being able to buy pets in a pet store seems unamerican. FWIW, guinea pigs have personalities.

I guess I have to disclaim that A) that isn't my hamster with a knife taped to it, Smoky doesn't get down like that and is way fatter and furrier than that little thing and B) I wouldn't actually irresponsibly breed my hamster just to piss off the SF Board of Supervisors (since Anon has sent the Humane Society after me I'm compelled to say that).

Then again, it's the Humane Society we're talking about:

Urban said she suspected that five Humane Society workers euthanizing animals outlined in the leaked documents are not trained vet-technicians.

"There doesn't appear to be vets overseeing this," she said. "That's the big problem. This is OJT, on the job training. A person took the job and an hour later was shown how to euthanize."

from the Connecticut Mirror

I am surprised that the San Francisco Board of Supervisors is not SUPPORTING pet overpopulation (pets are precious in this town, they get treated better than kids) since they're trying to get a $25 euthanization fee from pet owners to plug part of their budget hole.

guinea pigs do have personalities. And hamsters have Twitter accounts.

No gerbils were hurt in the making of this blog.

You people who railed against this
outrageous breeder of hamsters should be euthanized. I love hamsters especially with a bit of cilantro and onions on the side.
Actually the only thing about this hamster breeder that kind of bothered me is his refusal to recycle. You are gonna get found out and hung.

Natural Selection...it CAN be tampered with