SACRAMENTO – California’s unemployment rate decreased to 12.0 percent
in March, and nonfarm payroll jobs decreased by 11,600 during the month,
according to data released today by the California Employment Development
Department (EDD) from two separate surveys."

Did a bunch of people leave the state? According to their own data I don't see anywhere in the 4 pages of crack analysis by Loree Levy and Kevin Callori that indicates that. Here's the table: 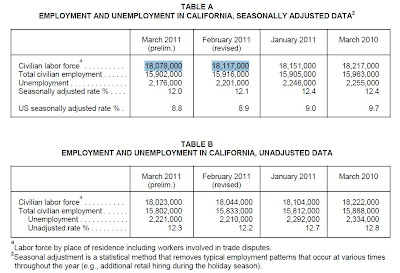 So the labor force shrunk by 39K? Really? That seems pretty drastic for a 1 month period don't you think? Yet on the unadjusted table the unemployment rate increased. Why? Oh:

The March jobless rate was down from February's revised figure of 12.1 percent. However, observers cautioned that the methodology used to calculate the number changed over that period, so comparisons were difficult.

No comment on what changed or why. They'll just change it and the sheep, I mean idiot masses, I mean citizenry will accept it. If Ignorance is Power then Loree and Kevin must be very powerful indeed.