The Empire Strikes Back

The worst thing that happened to our political machine was the collapse of the Soviet Union. Fortunately for Halliburton and the military industrial complex, Osama came along to take up the reigns as the new Darth Vader. Then he died in 2003 and then again in 2011 and we're left with a void and a reason to enrich the corporate machine at the cost of our freedom and our children's future.

Have no fear, Al-Zawahiri is here. 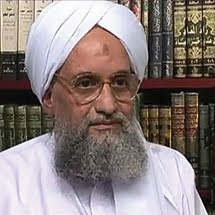 Again when I read news articles like this the Neville Brothers - Sons and Daughters goes through my head: