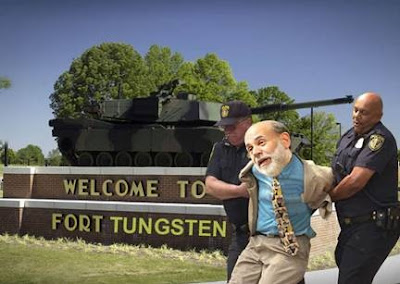 The Treasury document says it would cost about $15 million to conduct an audit. The process would take about 30 minutes to verify the gold content of each bar, or 350,000 man hours; to do that would would take 400 people working for six months, according to the document.

And 400 people working for six months sounds like shovel-ready jobs to me. Wasn't the Obama Administration for stimulus before they were against it?
By W.C. Varones - June 14, 2011

It would take less than one day, since the gold is either gone, stolen by those 'Too Big to Fail" Wall Street gangsters and the Fed--who's using it for collateral to back up all the funny money they've been printing--or it has been replaced by lead bars painted gold.

For them to bitch this much about a simple audit tells me something's fishy.

If this audit gains any traction, better hold on to your cell phone cameras, and get ready to document another 9/11 FALSE FLAG/INSIDE JOB to distract us sheeple.

No wonder the Zionist MSM has been blabbing almost non-stop about Anthony's wiener and that poor dead Casey kid.