Federal officials are taking off the gloves: They're pitting a mouthful of rotting teeth against a camel, and they're banking on the teeth.

For decades, tobacco companies have relied on flashy packaging and iconic images like Joe Camel to sell their cigarettes. Now, for the first time in 25 years, the U.S. government is forcing them to overhaul the packages and blanket the labels with graphic images, like a mouth ravaged by smoking, to warn of the hazards of cigarettes. 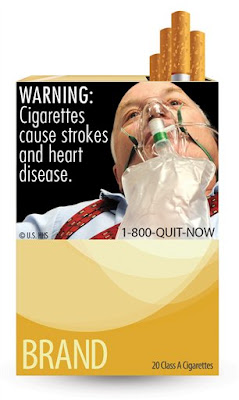 Just for semantics...Robert Downey Jr (Julian) did not go down on James Spader (Rip) in "Less Than Zero". He was doing a "John" because he owned 50K to his drug dealer, Rip.

Now back to the heart of your comments I can see your point. Truthfully it is beyond me in this day and age with all the information that is available to us regarding the dangers of smoking that anyone is stupid enough to start the filthy habit. It is prohibitively expensive (talk about having your money go up in smoke!) and no longer the cool thing to do in most circles. I have the feeling the campaign will do little to dissuade most smokers, but might stop some new ones.

Anon, I totally agree. You can put anything on a pack and it won't stop the smokers I know from smoking. This is obviously just a mirage to make the masses think the government cares. But then they have the nerve to outlaw marijuana, even in some states for medical purposes.

Pot doesn't have an addictive chemical in it and while it is as harmful as smoking tobacco, you smoke a lot less of it than your average smoker. Also no one has ever died from a pot OD, relating to other drugs including legal ones like alcohol.

To make illegal pot, spend billions on policing and punishing while at the same time allowing people to smoke a crazy addictive substance like tobacco, which definitely kills you is beyond logic.

I'd almost say make all drugs legal but I've seen some scary stuff on crystal meth. Man that thing destroys lives and not just the user so, hypocritically I suppose, I'm all for keeping that thing illegal.