Neal Obermeyer is a bad liar

One of the basic rules of political cartoons is that they're supposed to have a grain of truth in them to be funny and/or politically relevant. This lesson is totally lost on cartoonist Neal Obermeyer. Obermeyer, who lives in Omaha but somehow thinks himself qualified to comment on the California budget, is either completely clueless or a blatant partisan liar.

Obermeyer's recent cartoon in the San Diego Reader (yeah, they're hurting for cash and probably couldn't afford anyone else): 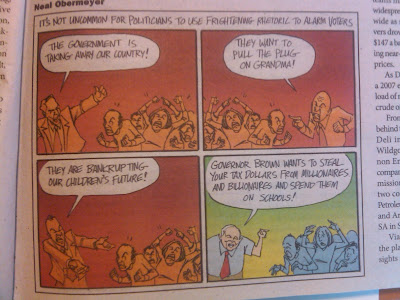 Granted, even if that were true, it wouldn't be very funny or witty. But it is so far from the truth one wonders if they even get California news in Omaha. Do they have the Internet there yet?

Brown did not propose any such thing. The three taxes Brown proposed raising and/or extending were the income tax, the sales tax, and the car tax. None of these taxes is targeted at "millionaires and billionaires." In fact, the 9.55% income tax kicked in at $47,000 for singles and $94,000 for families, hardly "millionaires and billionaires," and by far the highest income tax rate in the country for people at that income level. And anyone with even the slightest understanding of economics knows that sales taxes and car taxes are regressive, meaning they hit the poor the hardest. You think billionaires care about a few hundred bucks more on their car tax?

Fortunately, this is all a moot point as Brown and the Democrats just agreed to a budget with no tax increases or extensions, thus putting the lie to their previous claims about the end of the world if they didn't get their taxes passed.
By W.C. Varones - June 28, 2011

"in Omaha. Do they have the Internet there yet?"

Ouch, buddy... they do but they still use AOL with a squawking modem.