UPDATE: Jeff Macke is not broke! See his response below.

We haven't heard much from Jeff Macke since he did his bizarre "car people" rant on CNBC and was shortly thereafter relieved of his on-air duties.

The W.C. Varones blog gets some of its best tips from googlers, and somebody arrived here yesterday by googling "jeff macke broke." Was Macke's on-air breakdown related to a financial collapse?

Macke's web site doesn't say much but projects the image of a large, successful firm in San Francisco. SEC filings paint a slightly different picture. Filings from 2002 and 2005 list the address of Macke Asset Management as 2001 Union Street #320 in a mixed retail/residential/restaurant neighborhood. Coincidentally, W.C. Varones world headquarters used to be just up the street from there. It could not be ascertained over the weekend whether Macke still rents an office there, but my money is on "no." 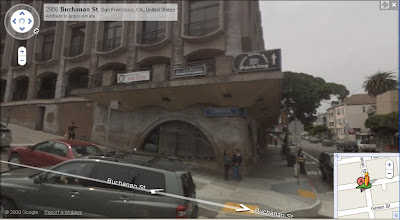 The same SEC filings show Macke holding shares in a midwestern retailer called Duckwall-Alco. His CNBC and Minyanville bios still claim he's on their board of directors, but according to this company press release, he resigned in 2007. One would think CNBC, with a purported journalistic reputation to uphold, would verify the accuracy of the bios of its on-air personalities every once in a while. And one would think Macke would correct that little error on Minyanville, where he continued to post as recently as two weeks ago.

If Macke Asset Management remains a real firm, there's remarkably little evidence of it doing anything. This web site shows them having $26 million under management as of some unknown date -- not enough to support even a tiny office with a couple employees, and that figure may be stale. "Macke Asset Management" appears to be an empty shell, possibly just the name he gives for running his own money -- if he has any left.

Bottom line, I think Macke could be another Lenny Dykstra -- all hat and no cattle.

I hadn’t seen that column, not being in the habit of Googling myself and never having heard wcvarones’ blog spot prior to your note.

It’s nice that websites regard me highly enough to speculate on my financial condition for better or worse. That said, the leap from ancient mid-decade filings and a digital picture of where I had an office in the ‘90s to me being personally “broke” is Beamon-esque. I currently live relatively near to the spot where Khadafy pitched a tent for his UN visit. I’m reasonably certain I don’t need to defend myself against any links to the Lockerbie bombing.

For the record, I left the board of Duckwall Alco after a decade of service which saw the stock price gain multiples from the time and price at which I joined. Despite those gains, which have decreased since my departure, Duckwall is an extremely small capitalization company. As asinine as it is to suggest I was padding my history by mentioning the position it would have been even more reckless for me to have hyped my role from a position as a national media figure.

In an era where the Madoff’s of finance pay for high rent office space to sucker clients into Ponzi Schemes I find it lamentable that I have to defend any aspects of my entirely legitimate and successful business operations from which I moved on years ago. Perhaps if I overpaid for client seducing marble entrances I really would be broke but beyond the scrutiny of half-assed blog-spots’ speculations. If I took the lease of Madoff’s vacated space in the lipstick building would blogspot hype a new fund?

It would be almost impossible for me to have less in common with Mr. Dykstra as a baseball player, drug abuser or business person. I played mediocre high school football and track but never did pre-game drugs or PEDs of any sort. Mr. Dykstra is to business what I am to Major League Baseball; a spectator and absolutely nothing more. Indeed, the pathetic flailing of Dykstra in business were more reckless and deceptive than a laymen’s swing at major league pitching in the sense that nobody loses their life-savings when a trader takes feeble cuts at Big League pitching. That doesn’t seem to be the case with Lenny where his personal ineptitude cost unwitting investors dearly.

I’m not broke. Perhaps if I were I’d start an asinine magazine targeted towards multi-millionaire baseball players or a desperate website speculating on basic cable personality’s personal finances. Six of one, half dozen of another.

Thanks for asking, Joe. I’ll let you know if I have a pending bankruptcy filing or better pictures of Pacific Heights office space.

I'm glad to hear it. While I didn't pay much attention to Macke on CNBC and sort of lumped him in with the rest of the bubbleheads, several comments I've seen indicate that he was actually pretty thoughtful and a good guy. And I'm totally with you on the car people thing, buddy.
By W.C. Varones - September 27, 2009

We miss Mr. Macke. The rest of you ninkumpoops just shut up already.

When Jeff Macke and Dylan Ratigan left FM...I did too. That bubble headed asian bitch they replaced Ratigan with was REALLY ridiculous. Watching her pretend to know something was and IS laughable...

I cannot stand her. Whatever her name is.

As for Macke, when he left CNBC Fast Money, the show went in the toilet. I bunch of pumpers. But hey, it's what CNBC wants. People to push their "ra ra ra" agenda.

I guess that means it's good for them to sell more advertising. Macke wasn't going to play the game.

Jeff macke smokes lots of pot almost every day in his rental in NY and pops masses of pills to try and stay calm so his comment about drugs taking is another joke. His melt down that day sure looked drug induced. If only there were drug tests for these fools he wouldn't be on the internet either spewing his tripe. But then again, I guess they can't take a hair sample to prove it.

WCV disclaimer: I have absolutely no knowledge of who the prior comment is from or whether the commenter has any actual knowledge of Jeff Macke's habits.

And I have absolutely no evidence to suggest that Macke uses drugs, other than having seen his "car people" rant.

If he doesn't do drugs he should, cut the guy some slack, wouldn't you drink, smoke pot, and pop fists of zanax and do any other drug you could too if you lost your job, your house, and all your money and then your wife? It must have been horrific.

Pot and Jeff Macke?Could be, It would seem some drugs were involved with the Jeff Macke melt down but Jeff macke perhaps doing drugs and losing his wife and money is not the real problem..... Jeff macke's biggest problem is that he looks just like uncle fester! Jeff macke is Fester! Speaks like him too! Don't ya see it?LOL!!

Has anyone noticed how ugly jeff is? His eyes are so low it is scary! Usually, this is an indication of retardation. At least that would be a defense (retardation) but he has none! Just a retard idiot.....he has no clue....just an ego maniac.......as they say in texas .......all hat, no cattle. Loser!! You have jack.....such a poser!

Jeff had that melt down on TV because that hag who was his wife made him nuts. On his own, without her, he could be back on national TV. She is so old and gross and just such an anchor to him! I am a 27 year old female who used to model and I find him so sexy but can't understand how any confident and successful man in his position would stay with such an ugly x wife?? After what she did to him? I am kinda groupie......I follow every move. She is so gross and such a door matt. I would love to meet Jeff. How can he stay tied to such a horrid icicle? Jeff! We love you!! She is old and mean!!! Take Me!!

Please Jeff, we read that book by eve marx, everyone knows now how bad you were screwed over. She is just a social, gold digging hoe. Just like the book says. We know why you snapped on air, it was because of her dumb ass!! Please tell your audience that. What man would not snap after learning that his wife was screwing the horse trainer for years behind his back? We all think you are the best! She is the dirt bag, she is just a hoe and the entire internet knows it!!

cesstheWho would not have snapped like jeff? He had an x wife screwing the young horse trainer he was paying for and his x was blaming it on him! God! He lasted longer than any human could. She made such a fool of him! Read "bedding ton place" by eve marx and you will understand. He was paying for the young horse trainer to fuck his wife! But he did not know!!! It is all known over the internet! She was such a hoe bag nympho whore and he was a good dad! Its all in the book!! It must have devastated him! He is the good guy in this!!!

Who would not have snapped like jeff? He had an x wife screwing the young horse trainer he was paying for it!! God! He lasted longer than any human could. She made such a fool of him! Read "bedding ton place" by eve marx and you will understand. He was paying for the young horse trainer to fuck his wife! But he did not know!!! It is all known over the internet! She was such a hoe bag nympho whore and he was a good dad! Its all in the book!! It must have devastated him! He is the good guy in this!!!

Who would not have snapped like jeff? He had an x wife screwing the young horse trainer he was paying for and his x was blaming it on him! God! He lasted longer than any human could. She made such a fool of him! Read "bedding ton place" by eve marx and you will understand. He was paying for the young horse trainer to fuck his wife! But he did not know!!! It is all known over the internet! She was such a hoe bag nympho whore and he was a good dad! Its all in the book!! It must have devastated him! He is the good guy in this!!!

Jeff does railroad tracks of cocaine.