THIS IS BRILLIANT: ZH is linking to a report that Christiano Ronaldo is going to be used as collateral against loans from the ECB.

“Ronaldo in the bailout fund,” headlines Süddeutsche Zeitung. The daily reports that the Bankia group of savings banks, which financed Real Madrid’s acquisition of the Portuguese player, is now seeking to borrow funds from the European Central Bank. In response to the ECB’s demand for guarantees, Bankio are putting up… Ronaldo and the Brazilian Kaka, who also plays for the Madrid football club. In 2009, Real borrowed 76.5 million euros to pay transfer fees of 100 millions euros to Manchester United, and 60 million to Milan AC."

So will JPM be issuing CDS's on those loans? Will a default occur if Christiano blows out his knee?

For those not in the know, Real Madrid spends massively on the best players in the world and then they have "soft" defaults in which the Spanish Government bails them out. Back in 2004 they purchased the best players in the world, really the equivalent of say one basketball team getting Jordon, Bird, Magic and Shaquille. Not exactly sporting and the beauty of it was that they didn't have the money to do it. So when the debt was coming do they just sold their training facility to the City of Madrid and then leased it back for something like $1 a year. Not exactly a great ROI for the Madrid tax payer.

Real's president, Florentino Perez, sold their 15-hectare training ground in the heart of fashionable Madrid to city and regional authorities for a staggering £290m in 2001. The sale helped clear the club's £177m debt, and left enough to pay unprecedented sums for Zidane, Ronaldo(Not Christiano), Luis Figo and Beckham. But the European Commission suspects the price was over-inflated and included a hidden public subsidy for what has been seen since the Franco era as Spain's official state-sponsored club.

I ask why stop at collateral? I'm sure Perez would love a new Yacht, why not also take out some equity on Christiano because I'm sure he's appreciated. I bet he could pull an extra 15 million Euro's out to purchase this: 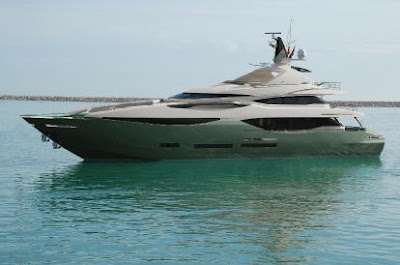 I mean everyone knows the value of soccer stars never decreases.