The Boehner plan is not a serious deficit reduction proposal. It would cut less than 1% of spending and less than 2% of the deficit next year. Even the completely inadequate $900 billion in alleged cuts out of a decade of $10 trillion or more in deficit spending is all back-end-loaded, meaning impossible to enforce and unlikely to happen. We are on an express train headed over a cliff, and Boehner would stoke the coals with just slightly less vigor than Obama and Reid.

That said, the Boehner plan may be the best political option for the Republicans. The biased media will tell the ignorant public that any chaos resulting from the debt ceiling is the Republicans' fault, which could lead to a Democratic electoral sweep. Pelosi and Obama are drooling at the prospect. In reality, the ceiling would be lifted if the Senate just passed, and Obama signed, the Cut, Cap, and Balance bill which is widely popular with the American people. Reid hasn't held a vote on it because Democrats don't want to be on record voting against Cutting, Capping, and Balancing.

The San Diego Tea Party regulars are split on the plan.

In favor: B-Daddy of Liberator Today (and Beers with Demo's Dean in the comments).

Opposed: Temple of Mut's Leslie Eastman also quoting at length Shane Atwell in her post, yours truly. A few other SLOBs chimed in mostly anti-Boehner on an e-mail exchange.

A few other resources from around the web: 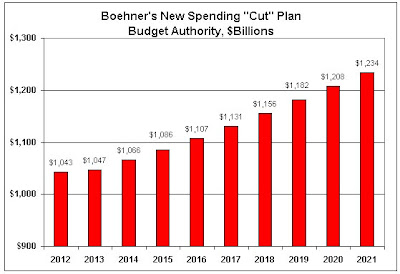 Mike Shedlock: Not raising the debt ceiling would be a blessing.

This puts into stark relief the reality of the government deficit spending - it is doing nothing more than covering up an economic Depression, and the so-called "exit plan" - that private consumption, investment and borrowing will "take the baton back" is not working.

The deficit spending must stop now before the tax base folds back and forces a disorderly collapse.

And finally a pro-Boehner response from Charles Krauthammer: The Great Divide.
By W.C. Varones - July 29, 2011