Too Light Vs. Too Heavy. Which is Funnier? 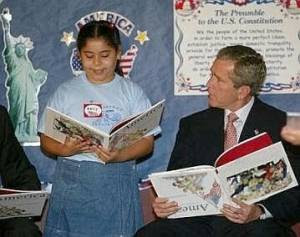 Bush and his upside-down children's book?

Obama bringing to a 6th Grade classroom his full-on, standard "Historic Speech" setup (sans Greek Columns), including two teleprompters, a Presidential podium with the actual Presidential Seal (not the fake seal Obama used during his campaign), and a special circular rug for Dear Leader. Can you blame him, though? His audience was 30 6th graders. If that tough crowd had heckled him like they did during his MA appearance/speech designed to boost Coakley's chances in MA, how else would he have gotten himself back on track? Any politician knows; teleprompters are key for talks with 6th Graders.... 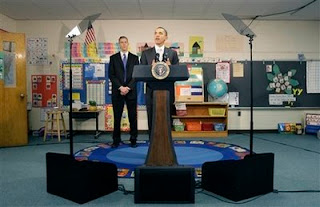 once elected, the first didn't take the job seriously enough

the second takes himself too seriously

correct me if I'm wrong, just assumed the Bushie photo was the one in the Florda classroom just before 9/11

I suggest the following theme song for Mr. Obama. I was/still am in love/lust with Carly.

whoops! what happened to the magic?

The Obama setup is for a press conference after meeting the kids... in a different room.