Illegal Immigrant Gets a DUI While Wearing a Mexican Costume, Laughs It Off 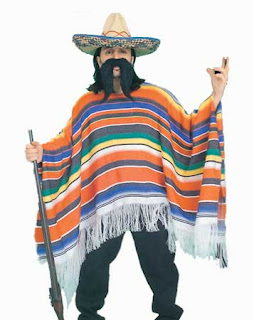 Please elaborate on "Mexican costume"
Filed under: This can't be real

A serious car crash involving a local lawmaker and a suspected illegal immigrant is threatening to reignite already heated debates about immigration on Beacon Hill, according to police reports obtained by FOX25.

State Rep. Mike Moran of Brighton was rear-ended by a suspected illegal immigrant this week. The suspect was wearing a Mexican costume at the time of the crash where he slammed into Moran at 60 mph.

The suspect, 27-year-old Isaias Naranjo, was charged with driving under the influence of alcohol, leaving the scene of an accident and driving without a valid license. According to the report, when told of the serious charges he would be facing, he just laughed.

But because of action taken by Gov. Deval Patrick, state police were unable to notify immigration authorities that Naranjo might be illegal.

The governor's aides are defending the measure, saying the department of correction can still pursue the violation.

Speaking of illegal immigrants, would anyone like to throw out a theory as to why the Department of Homeland Security does not allow its people to access this anti illegal immigration website? I would think the DHS would want its folks to have a broad knowledge of what's going on with our borders and therefore the security of, uh, our homeland. Oh wait, I forgot we're talking about the DHS here.

Better yet, the legislator who was rear ended at 60mph (that has to hurt regardless of what you're driving) voted to table the Arizona-style proposal submitted earlier this session. Gracias Señor! ¡OYE!

Very cool outfit. I woulda bought him another drink and sent him on his way.
Driving drunk should be a minor misdemeanor at most and only enforced to clear the vehicles of the comatose off the streets.

There were several years when I never drove when I wasn't drunk. Never had a bad outcome except for being frequently arrested. I think I drive better drunk and in my experience, most Mexicans certainly do.

They should take those MADD ladies out and horse whip them.