Lord Obama and Darth Bush both promised us that if we spent trillions to bailout their buddies, the recession wouldn't be as bad. Obama even gave us this cool graph in which he expressed what would happen if we didn't bailout his rich, crooked friends. Gateway Pundit posted the graph below in this article telling the early tale. 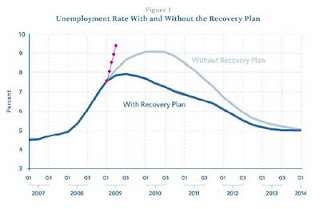 Alas, as many knew would come to pass, Obama was as accurate with his terror tactics as the Wizard of Oz. See here. Cue the doublespeak:

U.S. unemployment will surge to 10 percent this year and the budget deficit will be $1.5 trillion next year, both higher than previous Obama administration forecasts because of a recession that was deeper and longer than expected, White House budget chief Peter Orszag said.

The Office of Management and Budget forecasts a weaker economic recovery than it saw in May as the gross domestic product shrinks 2.8 percent this year before expanding 2 percent next year, according to the administration’s mid-year economic review issued today. The Congressional Budget Office, in a separate assessment, forecast the economy will grow 2.8 percent next year. Both see the GDP expanding 3.8 percent in 2011.

“While the danger of the economy immediately falling into a deep recession has receded, the American economy is still in the midst of a serious economic downturn,” the White House report said. “The long-term deficit outlook remains daunting.”

But, but, but, but, you promised!?!? Oh well, we still love with unconditional devotion because we know that Jesus never made a mistake. I love Koolaid!
By Negocios Loucos - August 25, 2009