Rep. Susan Davis packs "town hall" with stooges so she doesn't have to face constituents

So this is a "town hall" in Susan Davis' idea of democracy.

Her "town hall," which was kept secret from her constituents and the public until this morning (and even then advertised only to sympathetic groups), somehow managed to attract hundreds of Obama supporters with oddly identical pre-printed signs. The tiny Joyce Beers Community Center (picture a small college lecture hall or very small movie theatre) couldn't hold many of Susan Davis' constituents, but then she didn't want to see her constituents.

Here's what the line looked like outside the hall at the 6:30 start time after the hall was already full. These are the redundant extras in Obama/Davis' show of force:

Here's what the back of the hall looked like. 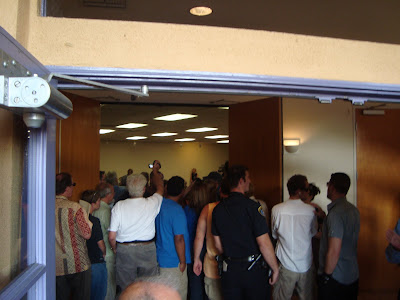 People kept coming out, complaining that they couldn't hear anything. "This is a terrible venue, way too small," one middle-aged woman said to her friend as they left. "That's by design," her friend knowingly smiled.

I wasn't going to stick around for the farce, but took this picture on the way out: 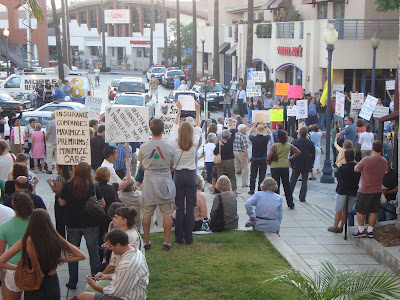 That's the front of the line and other pro-Obama loiterers in the foreground, and some anti-Obama protesters on the corner in front of Trader Joe's.

UPDATE: Sarah Bond of the SoCal Tax Revolt Coalition made it in and reports the following:

* Susan Davis slipped and said: “THE POINT IS THAT IT WILL EVOLVE INTO A SINGLE PAYER SYSTEM”. Sarah will have the video within the townhall up by tomorrow. UPDATE: Sarah clarified to me that this was a miscommunication in the fog of war between Sarah and Temple of MUT. Davis did not say this.

* Susan Davis lied and said there were no provisions for illegal immigrants in HR3200, the Congressional Healthcare Proposal. PLAINLY A LIE, PER PAGE 50 OF THE BILL.

* Susan Davis lied, telling a citizen questioner that the plan did not “provide incentives for business to drop insurance plans and utilize the government system (PLAINLY A LIE PER PAGE 150 of the BILL). When said citizen tried to cite the bill, the crowd of Organizing for America supporters shouted her down saying “No follow-up questions”. Untrue — Only pro-Davis people got to get those follow-up questions though.

* The pre-printed signs were developed by Organizing for America. The group of administration supporters were lead by obviously experienced activists — who inquired of our grassroots citizens group “where where YOU bused in from”.

All those folks thought they were showing America how government health care works. Long lines, denied access, and only the elite are allowed to participate.