The Fed's "Exit Strategy" for Total Idiots (Like the Fed) 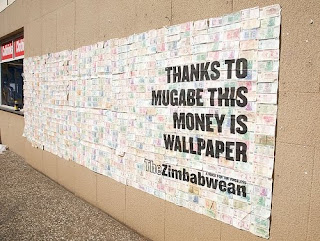 Sorry, I tried to come up with a clever title but there's really no other way to phrase it. This is what I waited months for? This is what I'm supposed to get butterflies in my Fedbashing little tummy for?! Please, this is pathetic.

So. Here's the big plan, the big stupid stinking plan to sop up all of that liquidity our buddy Zimbabwe Ben splurted all over the place I've been waiting forever for (via the Board of Governors):

The Federal Reserve Board on Monday proposed amendments to Regulation D (Reserve Requirements of Depository Institutions) that would enable the establishment of a term deposit facility.

If this isn't a Bad Bank for filthy Fed money, I'm not sure what is.

That right there should be a raging red flag pointing to the fact that these guys are clueless.

If they are not lying, it means they're idiots. A readjustment in their balance sheet of that size should most certainly factor into monetary policy as dollars (the "monetary unit" here, duh) are involved and a critical component to that balance sheet. WTF makes them think staving off inflation using some really wacky central bank tactics never tested in the wild isn't a factor in monetary policy? It would really be useful for the Fed to have this piece of information. Someone shoot them an email. Nevermind, I will.

If they are lying, well, that's sort of expected. If this is the best plan they could come up with as an "exit strategy", imagine what kinds of ideas they didn't go with. I almost prefer the scenario that paints the Fed like a bunch of lying asshats, at least in that one they know what they are doing. I fear that's fantasy and they're running blind. At least if they're lying, they understand the risks and will adjust monetary policy accordingly, just without letting us know. Oh please, who are you kidding anymore?

A commitment to as low as possible interest rates until doomsday and a Western Union payday loan-esque operation paying interest on money that the banks were supposed to loan out in the first place? I'm beyond confused. And pretty ill. If this is the best they've got, we really are doomed.
By Jr Deputy Accountant - December 28, 2009

The only solution is repudiation of debt, total collapse of the dollar ("not worth a Continental" ring any bells?), and rebuilding our country on sound money.

ISTR that the bankers of the day forced the newly borne Treasury to pay off some early paper. So, after over two hundred years, nothing has changed.

Whatever happened to "no state shall use any other than gold or silver as money" which is written into our Constitution. Oh, I forget.
Geo.Bu$h the lesser said (it) was just a goddamned piece of paper.

So the Dirty Fed floods the market with liquidity by printing hundreds of billions to buy up every Treasury and MBS in sight.

Then the Dirty Fed can't sell those bonds to withdraw liquidity because it would be selling at a large loss and the amount of the loss would be permanently left sloshing around the market.

So the Fed decides it will withdraw liquidity by printing even more money to pay interest on whatever Zimbabwe Ben dollars the banks temporarily park at the Fed.