Unfortunately, I didn't get any video or photos of this as it all happened so fast, I didn't have time to pull out my camera.

This is the front of the San Diego Hyatt where the California Republican Party is holding its fall convention this weekend. This picture was taken shortly before a handful of Tea Party activists showed up to protest Meg Whitman's stance against Proposition 23, which would suspend the job-killing AB-32 Global Warming Act until the economy recovers. 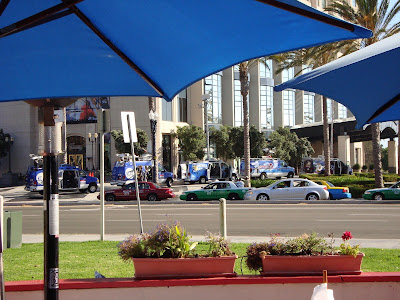 A dozen or so Tea Partiers soon gathered with signs on the sidewalk in front of the hotel, right about in the center of this frame. They chatted with passing tourists and some sympathetic Republican convention-goers, and got some supportive honks from passing cars.

There's a taxi stand starting about the right side of this picture. A young man and a couple of young women were standing near the taxi stand, talking and apparently waiting for someone or something. The guy was obviously a junior Republican operative there for the convention, completely overdressed for a balmy San Diego evening in a business suit. The women were more casually and tastefully dressed, probably not staffers but perhaps friends whom the guy had brought to the convention to show what a big shot he was.

They stood there for several minutes, talking and looking at the Tea Partiers. If the guy had wanted to say something to the Tea Partiers, he certainly had plenty of time and opportunity to come over and discuss it. He was only a few yards away, and the Tea Partiers were a small, friendly group, and certainly not physically imposing.

Instead, the guy got into a taxi, then as it rounded the corner to pull into the hotel driveway, he focused on an anti-Whitman sign and yelled, "F--- you!" at the Tea Partiers. As the taxi stopped at the curb behind another car, he flashed a middle finger at the group, then opened the rear door ajar as if to say "Okay, I'm coming to kick your ass."

No such luck. The taxi door closed, and the cowardly Republican slunk off into the night.

It was the highlight of the evening to see the Tea Party proove that real men aren't RINOS! I'm still laughing this morning!!

Was the young republican guy that yelled profanity from Kern County? The Kern County Young Republicans are Meg Whitman kool-aid drinkers and they don't deal with opposing opinion very well. They are always slandering people and will file complaints when you stand up against them. Very similar behavior to Nazi fascism.

The growth trend of greedy women on the U.S. political stage can only mean one thing - the U.S his headed for collapse.

In November, the GOP will be the *itch of the Tea Party.