California Controller: We are more screwed than we were when I told you two weeks ago that we were totally screwed

In the letter I sent you on May 29, I indicated we would have a negative cash balance of $1.02 billion at the end of July, and a low point for 2009-10 of $22 billion. The additional deterioration is a result of two factors: (a) May revenues coming in $827 million less than projected by the Governor’s May Revision, and (b) adjustments made by the Department of Finance to its revenue and expenditure projections. Attached is a chart detailing the projected cash low point for each month for the fiscal year starting July 1. 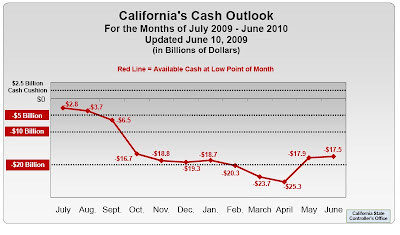 In a separate e-mail to highly influential financial bloggers but not available on the state web site, Chiang says:

"Without immediate solutions from the Governor and Legislature, we are less than 50 days away from a meltdown of State government. This presents a terrible threat to California’s economy and to the State’s delivery of basic public services,” said Chiang. “A truly balanced budget is the only responsible way out of the worst cash crisis since the Great depression.”

How do you think this will end? There's a poll on the right, and if you have further thoughts, put them in the comments.
By W.C. Varones - June 10, 2009