Every era has its get-rich-quick schemes. In the 90's there were worm farms, fuel-saving car engine adapters, and day-trading. In the early 2000's there were internet spamming and house flipping.

The common link is that there actually is someone getting rich quick, but it's the guy selling products and services to the gullible dreamers (e.g. seminar sellers, franchisers, mortgage brokers, etc.).

Which brings me to an odd phenomenon I've noticed lately: a proliferation of frozen yogurt shops. They are opening at an alarming pace in my area. Some appear to be independent, and some are franchise shops such as Golden Spoon and Swirls. What does a franchise cost? $35,000 up front plus 7% of gross sales. Anyone remember Cold Stone Creamery?

Now there's nothing necessarily wrong with the franchise model, but it's a little scary to see so many yogurt shops open up in such a small area in such a short amount of time (many don't even appear on Yelp or Citysearch yet because they are so new). I don't think the market is big enough to support them all -- and they are not competing only with other new yogurt shops, but also with coffee shops and ice cream shops that sell frozen yogurt. 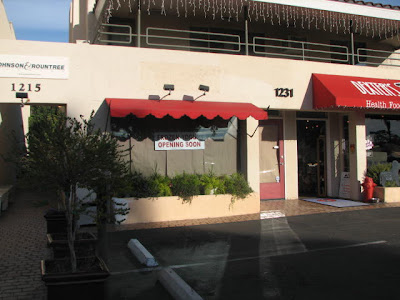 A "coming soon" frozen yogurt shop (now open) from our December CRE update. Next door is Dexter's Deli. Dexter is a dog. You can imagine Dexter's despair discovering the deployment of Three Dog Bakery just a few short blocks away. If Del Mar is over-yogurted, it's really over-gourmet-doggied. Coincidentally, Three Dog Bakery is in the same building as Java Kai Cafe, which sells frozen yogurt. 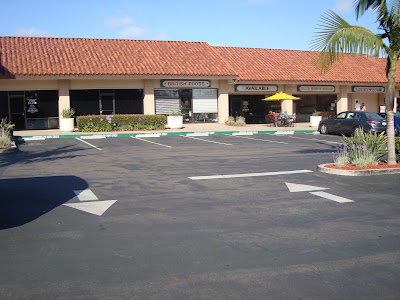 A new Golden Spoon in Solana Beach (far right) next to a salon, a vacant space, a British Food store, another vacant space, and another vacant space. It's a good thing they have those 20 minute visitor spots here -- as you can see, parking is impossible. I bet they got a deal on rent at least. Immediately on the other side of the freeway is a Baskin-Robbins. Between here and the ocean is “Twisted Tart” on Cedros, serving frozen yogurt and pastries. Across Highway 101 from there, a new frozen yogurt shop is opening next to Pizza Port. One exit down the freeway, a new Swirls is opening. And another exit down is another Golden Spoon.