Bet you wish you got returns like this! (+ Dirty Fed tactics) 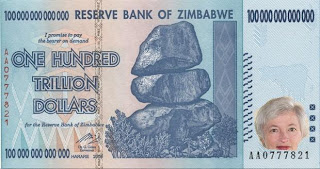 Pic credit: WCV himself
who once sent this to me with the caveat:
"I was thinking of emphasizing her stature. See attached."
So much win.

The TARP banks got a 6% yearly dividend from Fed "profits" just months after TARP and again after the Fed declared an amazing $46.1 billion in "profits" less than 2 weeks ago. Not just the TARP banks, any Fed-supervised bank required by law to hold Fed stock got a piece. That means Citigroup, JP Morgan, Bank of America... shall I continue?

To put this into perspective, Microsoft declared a 13 cent quarterly dividend at the end of Q4.

To make it even juicier, nutjobs like SF Fed's Janet Yellen are saying the Fed should pay interest on bank reserves held at the Fed - you know, all the cheap easy money the Fed is sitting on for the banks, which the banks are subsequently stuffing into Treasurys. Aren't they already planning on doing that? $$$$$ = "come get some before it's gone" so hope you got some before it turned into $$$$$$$$$$$$$. If accounting has taught me anything, it's that you cannot net indefinitely.

Funny, I always thought Yellen was a psychotic money-printing asshat but now that I think about it, isn't she the one who was all for the Fed issuing its own debt and thereby bypassing the Treasury "middle man"? She might be onto something (seriously, she suggested it, not me). Pretty soon she'll be saying the Fed isn't returning a penny of "profit" to the Treasury. Oh who cares, they'd just buy T-bills with it anyway. Could Janet be some kind of Monetarist Savant with the secret weapon to cripple the Treasury? Don't run my hipster ass over if you see me trotting down Market St, Janet, let's talk about this F-bill idea of yours. We'll get matching L12 tattoos, I already have one.

The banks probably consider this a "convenience fee" for doing the Fed's dirty Treasury-buying business on their behalf:

The Financial Services Regulatory Relief Act of 2006 originally authorized the Federal Reserve to begin paying interest on balances held by or on behalf of depository institutions beginning October 1, 2011. The recently enacted Emergency Economic Stabilization Act of 2008 accelerated the effective date to October 1, 2008.

Banking really is the greatest business. So, dear Obama, if you're ready to go after the banks, I think it is clear which Bank you really need to be going after. Ask your homie Paul Volcker and I'm sure he can at least give you a hint. If not, I just wrote it out for you.